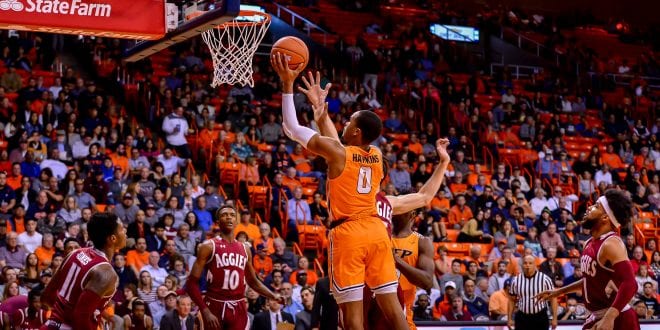 On Thursday, officials with UTEP Athletics put out the call for all UTEP fans to “Defend the Don”— from a distance.

“In these times of uncertainty, UTEP is asking Miner faithful to support the men’s basketball team from afar. In order for COVID-19 safety protocols to be followed, seating capacity in the Don Haskins Center will be significantly reduced for the 2020-21 season,” UTEP officials shared. “As a result, UTEP cannot, at this time, welcome any additional season ticket holders or sell any single-game tickets.”

To help offset lost revenue and continue to support UTEP student athletes at the highest levels, fans are encouraged to show their support and Miner Pride by participating in the “Defend the Don” program.

UTEP is entering its third year under the direction of head coach Rodney Terry. The Miners are coming off their most wins (17) in four seasons, while advancing to the Conference USA Tournament for the first time in two years.

Senior Bryson Williams returns after being named to the 2020 All-C-USA First Team. The 6-8 forward was the only player in the league to rank in the top five in both scoring and rebounding. Williams averaged 17.8 points game, ranking third in C-USA, and 7.2 boards which ranked fifth.

Junior Souley Boum led C-USA in free-throw shooting (87.8 percent), while ranking second on the team at 12.9 points per game behind Williams.

Terry also added key transfers, most notably Oklahoma 6-5 point guard junior Jamal Bieniemy. The Miners also brought in another player from a Power 5 program as Kristian Sjolund makes his way to El Paso from Georgia Tech. Both Bieniemy and Sjolund were recently announced immediately eligible by the NCAA to start play this season.

Four levels of involvement are offered, each featuring various benefits and prizes:

Fans who take part in the campaign will receive raffle tickets, providing them with the opportunity to win various prizes including Tim Hardaway signed jersey, UTEP Men’s Basketball jerseys, framed Don Haskins photo, $150 Subway gift card and so much more.

The raffle drawing will occur on Dec. 21 and winners will be contacted individually as well as announced on social media.

As an added benefit, all contributions are tax deductible (please consult your tax advisor). Individuals who are interested in helping to “Defend The Don” can either click here or call (915) 747-UTEP.

Throughout the upcoming season, fans are encouraged to use #DefendTheDon when posting on social media to cheer on the Miners.