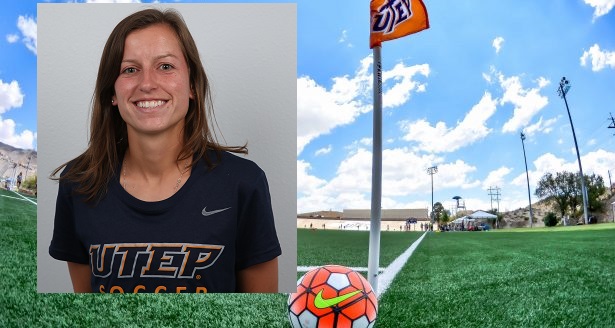 “I feel very lucky that United Soccer Coaches has played such a large role in investing in and developing me as a coach and person. I’m also super grateful to UTEP for supporting my growth on and off the field.”

KANSAS CITY – UTEP soccer assistant coach Kate Ward was one of 15 women selected by the United Soccer Coaches to represent the 2020-21 Class of the 30 Under 30 Program on Thursday.

Fifteen men were also announced as the class was selected from a pool of over 550 applicants, the most in the history of the program.

“I am incredibly honored to be included in a group of coaches whose time in the coaching work has been so successful and impressive,” Ward said. “I feel very lucky that United Soccer Coaches has played such a large role in investing in and developing me as a coach and person. I’m also super grateful to UTEP for supporting my growth on and off the field.”

Ward will enter her second season as an assistant with the women’s soccer program. The native of Atlanta, Ga., was hired by UTEP Head Coach Kathryn Balogun on Jan. 28, 2019. Ward helped direct the Miners to a record of 10-7-3 in 2019, the first double win total at the school in three years.

UTEP also posted a 5-4-1 mark in Conference USA action and punched its ticket to the league championship for the first time since 2016.

Prior to coming to the Sun City, Ward served as a graduate assistant at Virginia Commonwealth University. During her playing career, Ward represented the USA Deaf Women’s National Soccer Team at four international tournaments. She was also part of the USA team that won two gold medals at the Deaflympics (Taiwan 2009, Bulgaria 2013).

Launched in 2013, the 30 Under 30 Program is a year-long education and mentorship opportunity designed to support up-and-coming members of the coaching profession who are 30 years of age or younger.

Each member of the 30 Under 30 class receives an educational scholarship which provides registration for the United Soccer Coaches Digital Convention and an Advanced Diploma course of the coach’s choosing.

In addition, member of the 30 Under 30 Program are matched with a mentor dedicated to fostering their growth in the game and expanding their coaching network.