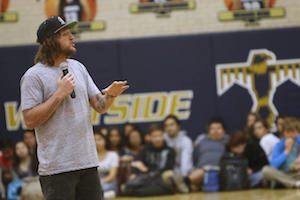 Look past the T-shirt, skinny jeans and tattoos, and you will find one of the most sought-after inspirational speakers credited with motivating students throughout the country to find their legacy, be kind to others and do good in the world.

Smith’s message – which he brought to the students at Coronado High School on Tuesday – is simple: an average guy with an average name can make a difference in the world.

The is founder and CEO of two non-profits, Smith is an author and a college lecturer who will be opening a high school for at-risk boys in the fall of 2018.

“I’m so glad he’s here,” said Student Council President Emily Tavizon, who had seen him before at a leadership conference and wanted him to come to Coronado. “It’s important for our students to have a legacy. He motivates people to be the best they can be and focus on their character rather than their outer appearances.”

Smith’s family moved to a small Nebraska town as he was about to enter eighth grade. The skinny skater found himself to be a ghost in his new school – lost in a sea of boys who were much bigger and stronger.

When Smith entered his sophomore year standing 10 inches taller and 40 pounds heavier, he started thriving in sports – earning attention and getting into trouble.

A turning point in his life came at age 17, when his father was diagnosed with cancer.

So he started over. He made a commitment to refrain from alcohol, drugs and partying, and also set a goal to attend college with a basketball scholarship.

With a C average and a disappointing decline letter from one college, Smith’s determination to earn a basketball scholarship, become a better person and leave his own legacy grew.

He stepped away from his friends and their bad influences, practicing basketball everyday in the gym for two hours before school started. It was then that his life truly changed. That’s when he met Calvin, a shy student with disabilities who had steered away from other students after years of being picked on. Smith walked past Calvin one morning without even acknowledging him, which later bothered him.

“I felt like I was too good to talk to people,” Smith said. “Those kids are not impressed with you. They could care less. All they care about is how you treat people.”

He later approached Calvin and even invited him to practice with him. Calvin wouldn’t indulge him initially but it became Smith’s personal mission to get Calvin to play. Just when he was about to give up, a defeated Smith sat down next Calvin, who finally asked: “Do you want to go to the gym?”

Smith then started spending time with Calvin, getting to know him and elevating his high school experience.

“I spent my whole senior year fighting for this kid,” Smith said. “My friends couldn’t understand why I was picking Calvin over them.”

But as Smith explains, his time with Calvin changed him for the better. He is now Calvin’s legal guardian and remains his best friend.

“That kid changed me,” Smith said. “He’s the reason I’m here. Everyone matters – no one is more important than another.”

His passion for helping others and his love for skateboarding led to the creation of his two non-profits: The Bay, a skate park and youth outreach center in Lincoln, Neb.; and Skate for Change, a youth movement that empowers skateboarders to give back to the homeless.

He is the creator and executive producer of The Harbor by Jostens, an online video resource that facilitates character development in schools. Smith also has teamed up with Wienerschnitzel for Hotdogs for the Homeless, a project program that has provided 75,000 hotdogs to homeless shelters.

Just before posing for a massive selfie with hundreds of Coronado students, Smith challenged students to find their legacy.

“Everybody wants to be amazing,” he said. “Find your excuses and get rid of them and think: ‘What do I want to be remembered for?’”