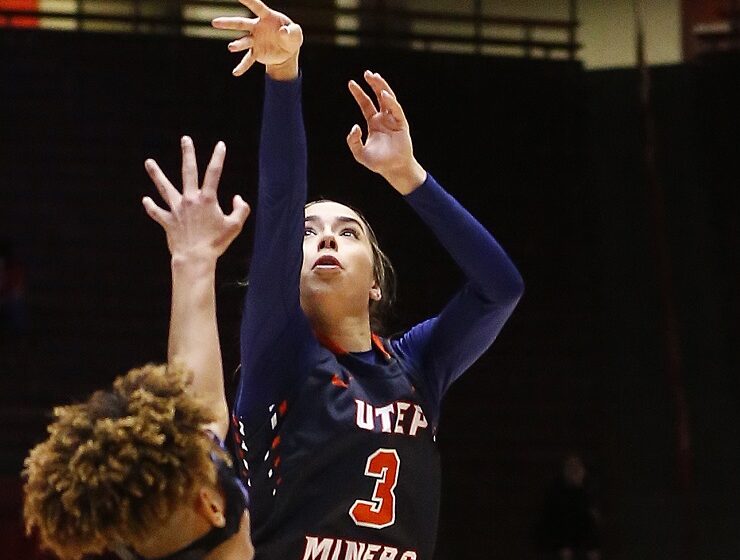 ALBUQUERQUE  – UTEP’s Katia Gallegos led all scorers with 25 points, while adding seven rebounds, four assists and a season-high four steals but it wasn’t enough as New Mexico (9-4) shot over 53 percent from the field to down the Miners (7-2), 78-66, at The Pit on Sunday night.

The Miners jumped out to a quick 5-0 lead, but the Lobos scored the next eight points and never relinquished the lead.

UTEP played without the services of leading scorer Destiny Thurman (16.0 ppg), who was a late scratch due to an injury she suffered at Texas State. Eliana Cabral ( 7.5 ppg and 3.4 rpg) also missed the game due to injury.

But UTEP battled back in the second half and trimmed the deficit to seven points during a pair of occasions on Gallegos’s hot hand.

The El Paso product converted a layup at the 5:18 mark of the third quarter to make the count 42-35, but the Lobos would score six straight points to extend the lead to 48-35. Gallegos hit another big shot for the Miners, as she drained a 3-pointer with 6:10 left in the game and cutting the lead to 64-57. However, UNM’s hot shooting pushed the lead to double digits (70-57) with 3:27 remaining.

“I’m proud of our team, but I think Destiny Thurman would’ve scored at least 12 [points] and Eliana Cabral would’ve scored around 10. You can’t play that game, but we all know that’s the reality,” UTEP Head Coach Kevin Baker said. “We just battled and battled, we cut the lead a few times, but gave up quick points. That’s something we have to get to the gym and fix. [New Mexico] is a terrific team. They have an ability to score which is really hard to guard them. They’re chaotic on offense, which is really hard to guard. But our kids just battled and they showed they are true competitors, they showed that they’re winners. We’re going to win games and we’re going to lose games. But if we battle like we did tonight, we’ll win more that we lose.”

New Mexico’s LaTascya Duff (team-high 20 points) and sister LaTora (17 points) combined for 37 points, including a combined 8-of-17 shooting 3-pointers. LaTascya finished 5-of-9 behind the line, and 6-of-10 overall shooting.

Gallegos shot 8-of-21 from the field and a team-best 5-of-9 from downtown. She added a 4-for-4 effort from the foul line.

Gallegos, with her four assists on Sunday, now has 315 assists in her career move past Shalana Taylor (313 assists) for fifth on the program’s all-time assists’ list. Ana Valtierra ranks fourth with 324 dimes.