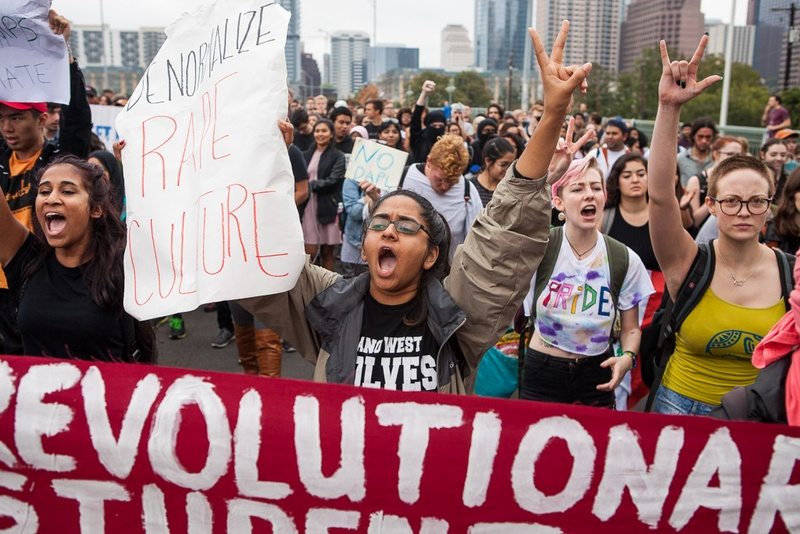 Students were joined by like-minded bystanders as the Austin Police Department stopped traffic ahead of the protesters’ path.

Hundreds of students from the University of Texas at Austin marched over five hours across downtown Austin Wednesday, blocking traffic and drawing supporters as they passed them, to protest Donald Trump’s presidential victory.

Starting before noon, a group of around 300 people gathered at the UT Tower and later marched to the S. 1st St. bridge. They then passed the Texas Capitol before heading back to campus. Students were joined by like-minded bystanders as the Austin Police Department stopped traffic ahead of the protesters’ path. The Austin Police Department characterized the protest as “peaceful with no incidents” on Twitter.

Shortly after the protest was over, Austin police chief Art Acevedo tweeted that the APD “serves the State Capital & always strive to help ALL exercise their First Amendment Right peacefully & safely.”

The Daily Texan reported that the protest was formed by a coalition of student organizations at UT, including the Palestine Solidarity Committee, the Queer and Trans Alliance and the Revolutionary Student Front.

“Donald Trump is a bigot and a racist,” Spencer Gutierrez, a sophomore majoring in design said while holding an LGBTQ flag. “This means more violence and more segregation. The election has been a joke since he announced his candidacy.”

Gutierrez said he was protesting because he was worried about LGBTQ rights and women’s reproductive rights being compromised by a Trump candidacy.

“Trump has been promoting Islamophobia and racism,” Dania Hussein, a senior biochemistry major waving a Palestine flag, said. “A lot of the minorities in this country are going to be hurt. We, as Muslims, don’t believe that we should be treated the way we’re being treated in America. The people who are not with Trump in this protest are at least hoping they can be heard and represented.”

Austin is one of several cities where groups protested the results of the presidential election Wednesday, according to CNN. At Berkeley High School in California, roughly 1,500 students left classes early Wednesday and marched toward the UC Berkeley campus, claiming that Trump is not their president. In Washington, D.C., two opposing rallies crowded Pennsylvania Avenue near the White House.

Carlos Manzo, the owner of U First Auto Body Shop, joined the Austin protest along with his workers when they saw students pass by. Manzo said that most of his workers are undocumented, and that he is afraid of how the Trump victory might affect his business.

“You can lose your business. We have a lot of Hispanics and Mexicans here, especially in Austin, Houston and San Antonio,” Manzo said. “We rely on these guys, that’s why I’m here.”

Alex Samuels contributed to this report.

Read more of the Tribune’s coverage: