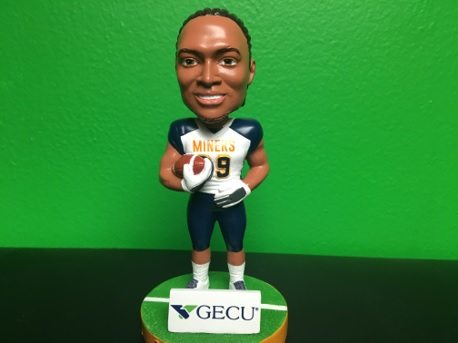 UTEP will celebrate “Legends Night” in the Sun Bowl when the Miner football team takes on UTSA Saturday, October 28 at 6 p.m.  And with one of the Miners’ newest legends, Aaron Jones, expected to attend, 1,000 lucky fans will receive a free bobblehead of the Green Bay Packers rookie sensation and the Miners’ all-time leading rusher.

Fans can pick up their complimentary game program as they enter the stadium and look for the Aaron Jones sticker on page 29.  Fans with the sticker can present their program at the bobblehead pickup, located on the North side of the Sun Bowl by the Larry K. Durham Center, to receive their free item.

There will be a limit of one program per fan that enters the stadium, with no exchanges.  Bobbleheads will be available for pickup at the football game only.

Jones earned third team All-American honors by the Associated Press following a 2016 season that saw him shatter UTEP records for rushing yards in a season (1,773) and a career (4,114).  He was recently named the NFL Rookie of the Week after rushing for 125 yards versus the Dallas Cowboys in his first career start as a pro.

The Miners will also honor five more legends — 2017 Athletics Hall of Fame inductees Antonio Davis, Seth Joyner, Blessing Okagbare, Cynthia Ruelas and Paul Stankowski — at the UTSA game.  Davis, who played basketball at UTEP from 1986-90, spent 13 seasons in the NBA and was a 2001 NBA All-Star.  Joyner, a member of the Miner football team from 1982-85, was named the NFL Defensive Player of the Year by Sports Illustrated in 1991.

Okagbare spent the 2008, 2009 and 2010 seasons on the UTEP track and field team and was NCAA champion in the long jump and 100 meters.  Ruelas starred on the Miner volleyball squad from 1993-97.  Stankowski, who played on the UTEP golf team from 1987-91, was the 1990 Western Athletic Conference champion before enjoying a long career on the PGA Tour.

Tickets to the UTEP-UTSA football game start at just $10 and are available by calling (915) 747-5234.   The Aaron Jones bobblehead is sponsored by GECU.