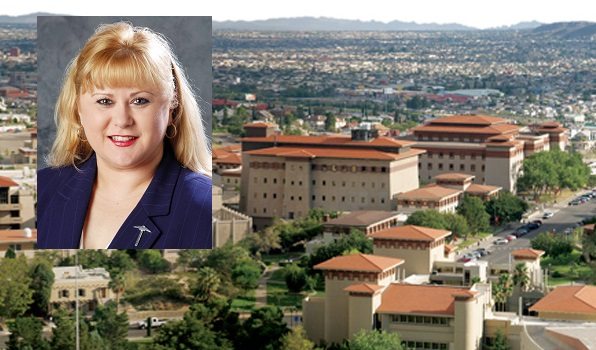 “[Escobar] is an accomplished woman with an outstanding record of achievement, high moral character, and unquestioned integrity, and she will make an excellent board member,” said Texas Sen. Jose Rodriguez.

“It is an honor to have been appointed by the Supreme Court of Texas to the Board of Directors of the State Bar of Texas,” Escobar said. “I have long admired the board’s work and it will be a privilege to serve. I look forward to being an active and committed representative of this region.”

Escobar has served for 15 years on President Diana Natalicio’s senior administrative team as Assistant to the President at The University of Texas at El Paso. She assists the President in the management and daily operation of the University, which has a budget of over $450 million, annual research expenditures of $90 million, 4,000 employees and more than 23,000 students.

Escobar oversees the offices of University Relations, University Communications and University Events. She manages the President’s Office staff, acts as a liaison between the President and various constituencies, and serves as her point person on issues dealing with Mexico. Escobar is part of the senior crisis management team, acts as spokesperson for the University with broadcast and print media in Spanish, and serves as protocol officer.

Escobar held previous positions as Executive Assistant to the Mayor in the City of El Paso, managing the city’s state and federal legislative agendas, public policy and media; Special Projects Director for the District Attorney of the 34th Judicial District, serving as spokesperson for criminal cases in El Paso, Culberson and Hudspeth counties; and in Washington, D.C., as Director at Public Strategies Washington Inc., a government affairs consulting firm, concentrating on clients’ public policy objectives in areas such as international trade, border environment and transportation.

Escobar earned her bachelor’s and master’s degrees in political science from UTEP.