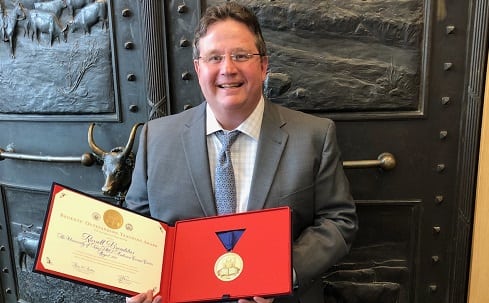 This year, the roster of deserving Miners includes not only UTEP faculty but alumni as well. Alumnus Russell Broaddus, M.D., Ph.D., a professor of pathology at The University of Texas M.D. Anderson Cancer Center in Houston, is now part of a distinguished band of faculty from the eight academic and six health institutions in the UT System to earn a ROTA for their extraordinary classroom performance and innovation in instruction.

“Receiving the Outstanding Teaching Award is truly an honor,” said Broaddus, who earned a bachelor’s degree in microbiology in 1987 and was named a UTEP Gold Nugget Award recipient for the College of Science 30 years later. “It is especially meaningful when I consider that many excellent teachers at M.D. Anderson Cancer Center have received this award in the past. Many of these are faculty who I have always looked up to and respected.”

Broaddus credits UTEP faculty members for the role they played in inspiring him to join the professoriate. He can still name a number of professors and teachers, both in and out of the sciences, who devoted tremendous time and enthusiasm to teaching and learning while he was a UTEP student.

“Their enthusiasm was infectious,” Broaddus said.

When Broaddus attended the University in the 1980s, the only doctoral program available in science was geological sciences. Therefore, much of the research in the sciences was dependent on undergraduate students doing the work.

“This is a very valuable asset not offered at many larger universities,” Broaddus said. “For example, it is not uncommon for Rice University undergraduate students to pursue research opportunities in the Texas Medical Center, because graduate students perform most of the on-campus research.”

As an undergraduate researcher, two UTEP professors, in particular, left a lasting impression on Broaddus and were pivotal in paving his path to becoming a researcher and professor. They were Lillian Mayberry, Ph.D., and Jack Bristol, Ph.D.

Mayberry and Bristol knew Broaddus since he was a child on the same little league team as their sons. They were excited when Broaddus responded to a call made by a postdoctoral fellow, Steven Upton, Ph.D., in his freshman biology class seeking anyone interested in pursuing research in a lab.

“When Russell entered UTEP, he desired to go to medical school,” Mayberry said. “But enthusiasm is infectious, and between Steve, Jack and I there was lots of enthusiasm. By the time he graduated, he decided he wanted a career in medicine as well as research.”

Upon joining Mayberry, Bristol and Upton’s lab, Broaddus applied for and was awarded the Staley Grant, which provided money for research supplies and travel to professional meetings. Mayberry recalls that, by the end of his freshman year, Broaddus had secured funding for a research proposal centered on parasites and the host’s response. By the end of his junior year, Broaddus had submitted his data for publication to the Journal of Parasitology and had his first major work published by the time he graduated.

Mayberry and Bristol nurtured Broaddus’ interest of research and medicine and eventually introduced him to another formative mentor in his career, Gilbert Castro, Ph.D., from the U.T. Health Science Center at Houston, where he went on to complete his medical and doctorate degrees. Broaddus proudly states that he models his teaching and mentoring style off of what he learned from these influential professors.

“I think our influence was through our enjoyment of our careers, it was catching,” Mayberry shared. “Obviously we are extremely proud of Russell … He is a truly gifted individual.”

As for UTEP establishing itself as the first national research university in the United States with a 21st century student demographic, Broaddus feels it has already hit the mark.

“There are UTEP alumni far more accomplished than myself,” Broaddus humbly stated. “In my opinion, the University somewhat undersells itself as a ‘rising university.’ The proof of UTEP’s status is in its many successful alumni.”