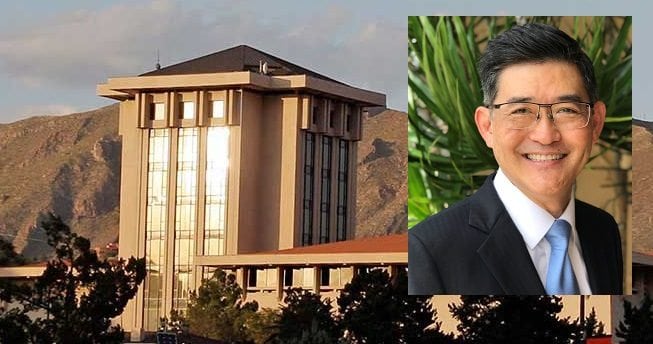 The University of Texas at El Paso announced the appointment of Clifton Tanabe, Ph.D. as the dean of the College of Education effective July 1, 2018. He comes to UTEP from the University of Hawaii (UH) at Mānoa.

Along with his administrative duties at UTEP, Tanabe also will be a tenured professor in the Department of Educational Leadership and Foundations.

“I am very excited about this opportunity to serve as the next dean of the College of Education at UTEP,” Tanabe said. “The responsibility to serve its students and those of the larger El Paso community, and to contribute to the continued growth of the college and this amazing University, is something that I am grateful for and take very seriously.”

The Indiana native who grew up in Honolulu, Hawaii, earned his doctorate in educational policy studies, and a law degree from the University of Wisconsin – Madison, in 1998 and 2004, respectively. He received his Master of Education in educational foundations from UH Mānoa in 1994 and his bachelor’s degree in humanities from Fort Lewis College in Durango, Colorado, in 1988.

Tanabe began his teaching career at the University of Wisconsin – La Crosse, where he co-founded and directed the Research Center for Cultural Diversity and Community Renewal.

At UH Mānoa, Tanabe taught educational policy and law and was a Lecturer in Law at the university’s William S. Richardson School of Law. He also served in the chancellor’s office as director for institutional transformation and executive assistant chief of staff. He served as director of the Leaders for the Next Generation Program and co-directed the Hawaii Educational Policy Center.

He has authored journal articles, book chapters and commissioned reports on such issues as teacher morale and parent and community engagement in local public education. His scholarship has focused on educational access for economically disadvantaged children and youth, anti-discrimination and affirmative action in education, and social power in education.

“We welcome Dr. Clifton Tanabe to the UTEP family as dean of the College of Education,” University President Diana Natalicio said. “His extensive experience as a leader in higher education combined with his student-centered research interests make him a great fit for UTEP and the critical role we play in the PreK-16 work of the El Paso Collaborative for Academic Excellence. I look very much forward to working with him to broaden the college’s engagement with our Collaborative partners.”

Tanabe will lead a college that has greatly impacted educational attainment in the Paso del Norte region. Most of UTEP’s College of Education graduates remain in El Paso and play major roles in setting high standards for school districts across the region. Despite its many socioeconomic challenges, the region ranks first in Texas for the percentage of its high school graduates who complete the recommended college curriculum.

The college also produces many bilingual and bicultural graduates knowledgeable in counseling, literacy, early childhood, STEM education, social/cultural foundations, special education and mental health services and educational scholarship. They are in demand around the region and, as the Hispanic population continues to expand, around the country.

UTEP Provost Carol Parker said she was pleased and excited with Tanabe’s decision to join the University.

“As dean, Dr. Tanabe will have exceptional opportunities to lead UTEP’s efforts to work closely with area superintendents, El Paso Community College administrators, and business and community officials to expand educational prospects across the region, and to address regional and national issues in education and teacher preparation,” Parker said. “I believe Dr. Tanabe is highly qualified for this assignment.”

“We appreciate very much the fine work that Bill Robertson has done for the College of Education during this time of transition,” President Natalicio said.