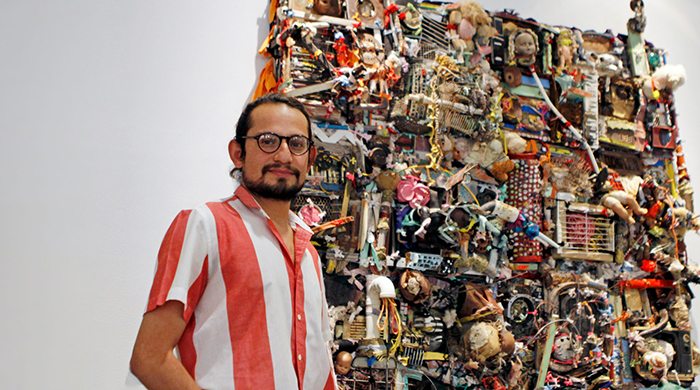 The old saying, “One man’s trash is another man’s treasure,” took on a whole new meaning for Guillermo “Memo” Gutierrez as he sifted through refuse at a dumpsite in far east El Paso County.

Gutierrez, a studio art major at The University of Texas at El Paso, converted the site into his art studio and assembled a cache of discarded objects from ragged toys to broken gadgets that he stacked together to create a totem-like structure.

“I was really interested in materials that were strange and that I found interesting, like children’s toys, splintered wood and rusted metals,” Gutierrez explained. “I was basically picking things up that I found just plain old interesting.”

The result was “Krag,” a 9-foot by 8-foot sculpture that Gutierrez named after Krag Street, where the dumpsite is located.

“Krag” is the first work of art by a UTEP student artist on exhibit at the El Paso Museum of Art (EPMA) as part of a new collaboration between UTEP’s Department of Art and the museum’s LabEPMA series. The sculpture will be on display through May 7.

Four times each year, LabEPMA provides emerging regional artists an opportunity to exhibit one work of art in any media accompanied by a 30-minute discussion of their work. One of these annual slots is devoted to special collaborations with UTEP’s Department of Art.

As part of the initiative, the EPMA curatorial department will select one UTEP undergraduate student each year to showcase his or her artwork at the museum for three months.

“My professors have definitely pushed me in the right direction,” Gutierrez said. “If it wasn’t for them, I don’t think I would be here (exhibiting at the EMPA). I guess it means I’m doing something right.”

The idea for a UTEP LabEPMA artist came to fruition in 2016 when Vincent Burke, associate professor and former chair of the UTEP art department, proposed a collaboration between UTEP and the EPMA curatorial department to give fine arts students a chance to participate in a meaningful and unique professional practice experience.

At the time, the museum was rebranding its program formerly known as Artists on Art, and the UTEP LabEPMA idea was a great addition to the lineup of four exhibitions per year, said EPMA Curator Christian Gerstheimer.

“Artists generally do not have an opportunity to showcase their work at a major museum of art until later in their careers,” Burke said. “The fact that we are showcasing an undergraduate student and undergraduate research is noteworthy. It demonstrates a commitment from both UTEP and the EPMA to invest in and grow our local artists.”

Each spring semester, art department faculty will select three to four juniors who are art majors to present their work to the EPMA curatorial department. The department’s curators will choose the UTEP LabEPMA artist. The winner will exhibit one work of art the following year.

For Gutierrez, being selected as the first UTEP LabEPMA artist wasn’t an easy task.

He competed against four other talented UTEP art students for the coveted spot. Each student submitted an exhibit proposal that included an artist statement, curriculum vitae and a description of his or her artwork. They also met with EPMA curators to discuss their proposals.

Gutierrez, who has participated in exhibitions at the Rubin Center and the UTEP Glass Gallery, planned to create a giant quilt of objects he found while wandering through the Krag Street dumpsite.

“Guillermo Gutierrez was selected because his proposed project adapted most fully to the requirements of our exhibition space and the intentions of the LabEPMA exhibition program overall,” Gerstheimer said.

Gutierrez rolled up his sleeves and dug into his project. He carefully examined each object he collected, including dolls, circuit boards and television sets.

“I found lots of dentures,” Gutierrez said with a laugh. “I would get teddy bears and I would flip them inside out and restuff them. Then I would add the dentures to them.”

Over six months, Gutierrez stapled, glued, nailed or tied dozens of items onto square looms he weaved out of clothes and fabric that littered the dumpsite. He also met with Gerstheimer to update him on his progress.

“It was a great experience,” Gutierrez said. “I learned a lot about myself and about my work. I learned a lot about deadlines and how to interact with curators. To a certain degree, I know how it feels to work in the real world as an artist. I thought that was really cool and super informative for my future.”

Jennifer Serna stopped to look at Gutierrez’ monumental sculpture on her way to the Texas Tech University College of Architecture library inside the museum.

“I like the overall concept of highlighting waste, which seems kind of unusual but we produce it every day, and for somebody to turn that into a work of art is impressive,” said Serna, who has a degree in art history from UTEP. “It’s almost kind of like a historical piece. There’s a story behind every item. There are children’s toys, a pipe and a broom. You can imagine the story behind these items because they belonged to someone.”

Gutierrez expects to graduate from UTEP in fall 2017. He also is looking forward to mentoring the next UTEP LabEPMA artist.

“I definitely would tell students to get involved,” Gutierrez said. “This was an exciting experience.”