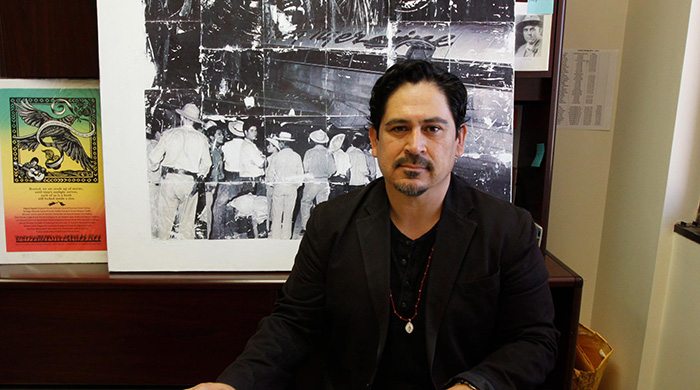 The tragedy made headlines across the United States, but news accounts neglected to name the Mexican nationals who died, many of whom were in the U.S. legally with the Bracero Program – an agreement between the U.S. and Mexico that allowed Mexican citizens to take temporary agricultural work in the U.S. – but were being deported after their agricultural labor contracts ended. Instead, newspapers only listed the names of the pilot, flight attendant, first officer and immigration officer. The rest were referred to as “deportees.”

“It’s easier to generalize people with words like ‘deportee’ or ‘immigrant’ instead of using their real names,” said Tim Z. Hernandez, a creative writing assistant professor at The University of Texas at El Paso. “But I feel that when we use words like that, whether it’s in the past, or now, or in the future, what we’re really doing is making them unidentifiable. We’re stripping away their faces so we don’t have to look directly into the eyes of the people that we treat poorly.”

For more than 60 years, these 27 men and one woman remained anonymous; their remains buried in an unmarked mass grave at Holy Cross Catholic Cemetery in Fresno, California.

In 2010, an old newspaper story about the plane crash inspired Hernandez to identify the migrants and raise funds to have their names engraved on a memorial at the gravesite. Years of painstaking research led Hernandez, an award-winning novelist and poet, to write about their story in his new book, “All They Will Call You,” published by The University of Arizona Press.

Released in 2017 on the 69th anniversary of the plane crash, the book brings the migrants to life through interviews with their surviving family members.

Hernandez borrowed the title from lyrics in Woody Guthrie’s song “Deportee (Plane Wreck at Los Gatos).” Guthrie wrote it as a poem to protest the media’s disregard of the Mexican laborers. The poem was later set to music by Martin Hoffman. Through the years, Guthrie’s anthem has been performed by various artists, including Joan Baez, Bob Dylan and Bruce Springsteen.

As Hernandez read about the plane crash at the Fresno County Library, the song’s lyrics drifted into his head:

“You won’t have a name

When you ride the big airplane,

All they will call you

“I think the story has three main things that entice people,” said Hernandez, a UTEP faculty member since 2014. “One is that it’s tied to famous American songwriter Woody Guthrie. Two, the topic is immigration and that’s timely right now. And three, there’s a mystery behind it. What are their names? What happened to them? It’s an American story and a Mexican story, and it’s filled with mystery.”

“We died ‘neath your trees and we died in your bushes”

The mystery began to unravel when Hernandez and Carlos Rascon, the cemeteries director for the Roman Catholic Diocese of Fresno, compared the names on the migrants’ death certificates to misspelled and anglicized versions of their names in the diocese’s church register.

After the migrants’ names were identified, Hernandez began to search for their survivors. Jaime Ramirez, whose maternal grandfather, Ramon Paredes Gonzales, and his great-uncle, Guadalupe Ramirez Lara, were passengers on the doomed flight, emailed Hernandez after a story about the author’s endeavors appeared in a Fresno newspaper.

When he was 9 years old, Ramirez’s mother told him his grandfather had been killed in a plane crash in the Diablo Range – a mountain range that runs through Los Gatos Canyon – but she didn’t know where he was buried.

In 1989, 15 years after immigrating to Salinas, California, Ramirez located his grandfather and great-uncle’s death certificates at the Fresno County Hall of Records and found their grave.

“My (paternal) grandfather was Guadalupe’s brother and he told me, ‘I can go in peace because I know through you where my brother was buried,’” Ramirez recalled.

Ramirez loaned Hernandez a tattered newspaper clipping about the crash that his mother had saved from a 1948 Mexican paper called El Faro.

The story listed the names of the Mexican citizens and their next of kin. With this information, Hernandez tracked down the families of six farmworkers. In total, he found seven families.

In 2015, Hernandez, along with Ramirez’ brother, Guillermo, traveled to Guanajuato, Jalisco and Zacatecas in Mexico to interview relatives of three of the victims.

In Jacotepec, Jalisco, Hernandez interviewed Casimira Navarro López, the fiancée of Luis Miranda Cuevas, a passenger on the plane who was on his way home for their wedding.

“She had such a vivid memory,” Hernandez said about Navarro López. She told the author about the time her fiancée wore a dress to sit next her while she sewed so her father wouldn’t know she was talking to a boy. “(Navarro López) was waiting for someone to ask her about what happened to her boyfriend. That’s how I felt. She just started gushing about their love, about their romantic relationship. She didn’t hold back.”

“The radio says, ‘They are just deportees’”

Even before its release, “All They Will Call You” had already incited conversations about immigration policy and reform in the U.S.

This time, though, media such as C-SPAN and National Public Radio acknowledged the Mexican nationals who died in 1948, thanks to Hernandez’s efforts.

The book also has reignited interest in Woody Guthrie’s song. In “Deportee (Plane Wreck at Los Gatos),” Guthrie lamented, “Who are all these friends, all scattered like dry leaves?” His son Arlo Guthrie said Hernandez had finally answered that question.

“It was unknown if their stories would ever come to light, or if they would simply remain ghosts without names, as if they had no lives at all – as if they didn’t count,” Arlo Guthrie said in a press release about the book. “Through Hernandez’s amazing work, I now know who these people were, their lives, their loves, and their journeys.”

Hernandez, with the editorial help of UTEP alumnus and local filmmaker Valentin Sandoval, plans to release a documentary about the migrants and their families in January 2018 when the book is released in paperback.

Today, the names of the 28 migrants are inscribed on an 8-foot by 4-foot memorial that lies at the gravesite. It was dedicated on Labor Day 2013. Also engraved are the names of the flight crew and immigration officer.

“I hope people at least now know exactly what happened and how they were forgotten,” Jaime Ramirez said after reading Hernandez’s book. “My satisfaction is they have a stone with all their names. They may get some peace now.”