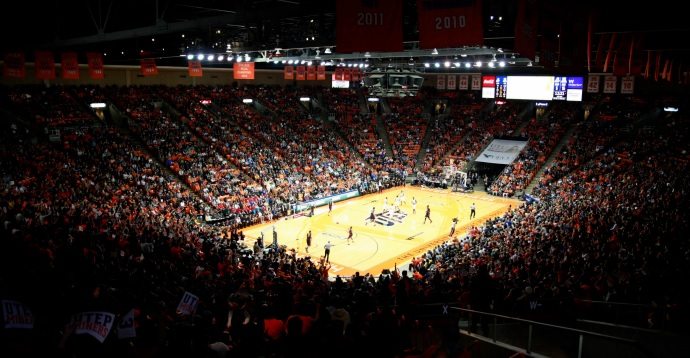 Conference USA’s initial round of national TV selections is complete, and five UTEP men’s basketball games have been picked up for telecast during the 2015-16 season.  CBS Sports Network has two games and FOX Sports has three.  All are conference games.

Additional TV games remain a possibility via the American Sports Network and will be announced when finalized.

The Miners will play 20 home games, including six straight to open the season, and participate in the Corpus Christi Coastal Classic over Thanksgiving weekend. The slate also features the renewal of the I-10 rivalry series with NM State and a matchup at Washington State, continuing a four-game set with the Cougars out of the Pac-12 Conference.

The Miners will join Norfolk State, Sam Houston State and UC Irvine in the 54th annual WestStar Bank Don Haskins Sun Bowl Invitational Dec. 21-22. The tournament features four 20-win teams, including the Miners who were 22-11 a year ago.

Over the last two seasons the Miners have posted 45 victories, including a combined mark of 25-9 in Conference USA play.

On March 19, 1966 Texas Western College — now known as the University of Texas at El Paso — captured the NCAA championship with a 72-65 upset of top-ranked Kentucky. The game bore tremendous historical significance as the legendary Don Haskins became the first coach to start five black players in the title game.

To this day, UTEP remains the only Division I school in the state of Texas to win a national championship in men’s basketball. The 50th anniversary of the 1965-66 Miners will be celebrated this season, and UTEP’s plans to salute the historic group will be unveiled in the very near future.