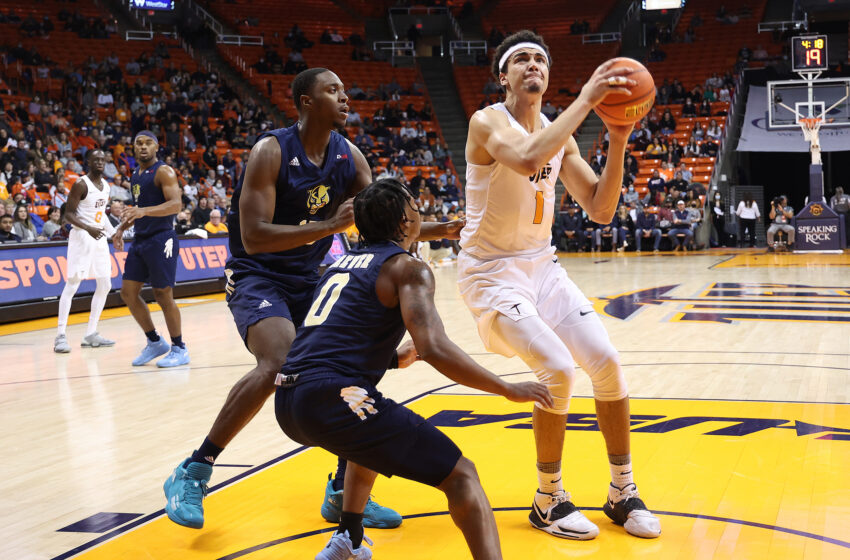 UTEP men’s basketball redshirt-junior Tydus Verhoeven comes from a basketball family. His mom, Jodi, played at Fresno State, and she would have had the opportunity to compete for the WNBA’s Los Angeles Sparks. She gave all of that up, though, when she became pregnant with Tydus, and she never returned to play competitively again.

“I learned it (the decision his mom made) pretty early on,” Verhoeven said. “She was very transparent with me. She kept everything pretty honest. It was interesting because most people have like their dads teaching them the game. Mine was my mom, so I never really looked at it differently. I just looked at it like my mom was my source of basketball knowledge really.”

Verhoeven put the lessons that his mom instilled in him into place, and had a pretty good idea at a young age that he could do something with basketball.

“When I was in middle school you start realizing you’re getting better than other kids,” Verhoeven said. “I really had the height, and I really enjoyed doing it, so that’s when I probably realized I could make a career doing this.”

The 6-9 post player has made the most of that opportunity, and he’s aware of how many chances he’s had that never would have been possible without basketball.

“Basketball has opened up so many doors,” Verhoeven said. “I’ve lived all over the country thanks to basketball. Of course I’ve got my undergraduate degree in anthropology because of basketball. Now I’m getting my master’s (degree) in sociology. There’s been the opportunity to go play overseas, which I turned down last year to play again. Basketball has been more than generous to me.”

“If you had asked me in the past, I would have never imagined me going for my masters,” Verhoeven said. “My mom would say the same thing so it’s a surreal feeling to be able to not only get your masters, but to get it on a scholarship where you don’t have to pay for it. It still hasn’t hit me yet. The anthropology degree in undergrad is finally hitting me too now that I have that degree as well.”

Verhoeven is a self-professed huge history nerd, which stems from some incredible stories he heard growing up.

“My great grandparent on my mom’s side used to tell us stories of when he lived in the Netherlands in World War II when Nazi Germany occupied it,” Verhoeven said. “He used to tell us stories about how he would have to hide from the Nazis to avoid conscription to the military. Then I started to really dive into World War II. I actually used to go to the veteran halls and go talk to the vets and ask them questions because I always had a book in my hands about World War II.”

History and basketball aren’t two things that tend to connect often, but it’s not an issue for a well-rounded individual like Verhoeven.

“It’s an interesting balance because they don’t really go together sometimes but it’s really easy,” Verhoeven said. “You can be passionate about more than one thing in your life. That’s how I look at. You work hard on the basketball floor, but when you’re not on it you have other interests. One of mine might bore some people, but I’m the type that I’ll be on my computer and search some history facts and the next thing you know it’s an hour and a half later. So that’s just how I am. It’s an interesting mix, but I think I found the balance pretty well.”

Verhoeven has put in hard work all season long for the Miners, and the payout has really been coming of late. He has recently put together three straight double-digit scoring games for the first time of his collegiate career. Verhoeven leads the team in blocked shots and offensive rebounds, while rating second in rebounding. His success translates directly to UTEP’s success, with the Miners standing undefeated in games when reaches double figures in scoring.

He’s quick, though, to bring it all back around to his mom with the type of player she was and how that has helped him and shows up in his game.

“She was a bucket,” Verhoeven said. “She could shoot that ball. She could defend and really shoot it.  She had a really high IQ. Luckily, she passed some of those traits to me. She’s definitely the best scorer in the family.”