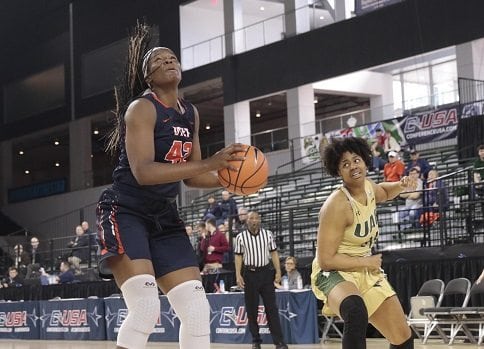 FRISCO, Tx – Tamara Seda registered her 15th double-double (15 points, 14 rebounds) of the year and ninth-seeded UTEP made a valiant effort before top-seeded UAB pulled away down the stretch to down the Miners, 75-66, in the quarterfinals of the 2018 Conference USA Championships at the Star Thursday.

The Blazers (25-5) advance to face fifth-seeded Rice in the semifinals while the Miners (17-14) bow out of the event and most likely conclude the campaign having more than doubled their overall win total (8-23) from a year ago.

UTEP dug itself an early double-digit deficit (15-5, 3:39 1Q), but Seda and the rest of the Miners refused to go down quietly against the regular-season champion Blazers. UTEP clawed back within two (33-31) at the half before eventually vaulting out to a five-point lead (56-51) with 58 seconds left in the third quarter.

UAB responded by wrapping a 12-0 run around the quarter break, and it never trailed again. UTEP did score the game’s next four points to get within three (63-60) with 6:17 left but an 8-2 push over the next four minutes sealed the Miners’ fate. Overall UAB outscored UTEP, 20-10, in the decisive frame.

“I’d like to thank everybody here in Frisco and everybody who made this tournament possible,” UTEP head coach Kevin Baker said. “The best team won today. They’re the number one seed for a reason. They played really well, especially down the stretch. I hate that for our team because I thought we battled so well to be with them in the fourth quarter. But UAB did what champions do. They hit clutch shots in the stretch.”

UAB was paced by 21 points from Deanna Kuzmanic, with Rachael Childress (15 points), Miyah Barnes (13 points) and Katelynn Thomas (10 points) joining her in double figures for scoring. The Blazers nailed 46.2 percent (30-65) from the floor despite UTEP holding the nation’s fifth-rated 3-point shooting team to 32.3 percent (10-31) from beyond-the arc.

“Tamara has been nothing short of our leader and we appreciate everything she’s done for UTEP women’s basketball,” Baker said. “Our hats are off to her, what she does and what she means to the city of El Paso.”

The two sides traded scores early on, with a deep 3-pointer by Faith Cook tying the tilt, 5-5, on a 3-pointer that she was fouled on. She couldn’t convert on the ensuing free throw, though, and UAB took off. The Blazers ripped off 10 consecutive points to put the Orange and Blue down 10 (15-5) with 3:39 to play in the opening frame.

Roeshonda Patterson made a driving lay-up to stop the surge but UAB answered immediately with a transition lay-up to once again make it a 10-point tilt (17-7). UTEP was able to inch within seven (23-16) heading to the second quarter.

Jenkins drilled a 3-pointer from the corner to get the Orange and Blue within four (25-21) early into the second frame but UAB answered immediately with a lay-up and eventually went back out by six but a Jenkins lay-up followed by a Seda score got it to within two. It was back-and-forth the rest of the frame, with UAB holding the small edge at the break.

The Miners took their first lead (36-35) of the game on a triple from Katarina Zec early in the third quarter. That play started a thrilling sequence which featured a pair of lead changes and four ties over the next seven minutes. UTEP then put together its best stretch of the day by peeling off eight consecutive points to surge out by five (56-51) with 58 seconds left. UAB got two scores to close the quarter, cutting the lead to one (56-55) through three 30 minutes of action.

The Blazers continued the run over the first two minutes of the final frame, to wrap up that aforementioned 12-0 surge. UTEP battled down the stretch but couldn’t get closer than three the rest of the way.