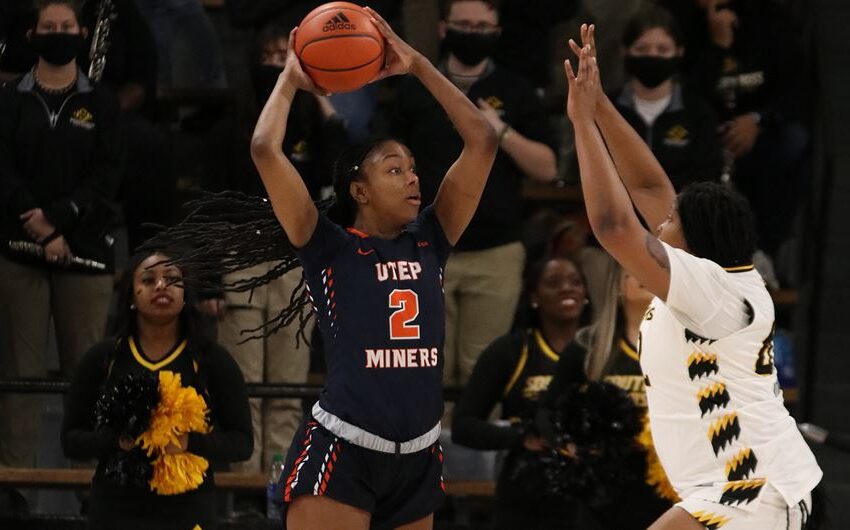 Southern Miss withstood multiple late punches from UTEP to escape with a 55-49 win on Monday afternoon in Reed Green Coliseum.

The Golden Eagles (11-5, 3-2 Conference USA) were the third opponent in five days for the Miners (10-5, 2-3 Conference USA), who remain on the road for three of the next four games.

“For whatever reason we just could never really quite get in a flow,” UTEP Associate Head Coach Todd Buchanan said. “We kind of always stayed between that two-possession differential – the obvious reason is two-fold – number one, the lack of rebounding on our end, so you have to give Southern Miss credit there because that’s who they are and that’s what they do. The other side of it is when you shoot below 30 percent as a team collectively you feel like you’re always climbing up – climbing a mountain so to speak.”

Southern Miss jumped out to a 9-2 lead just under five minutes into the game after a jumper by Lauren Gross. Facing the early deficit, the Miners consistently battled back throughout the game despite never taking the lead.

Following the fast start for the home team, UTEP answered with a 7-0 run to even things up at 9-9, capped off with an Avery Crouse layup with 2:03 in the first.

That sequence would be a foreshadowing of how the day would go between the two sides, with the Golden Eagles clinging to a 40-34 lead entering the fourth quarter in a contest that had been back-and-forth throughout. In total, there were four ties and no Southern Miss lead of more than single digits.

In the fourth quarter following a Southern Miss foul to give UTEP a fresh 20 on the shot clock, Katia Gallegos made the Golden Eagles pay with a mid-range jumper to make it 40-36 with 8:15 left in. Two possessions later, Elina Arike brought it down to a two-point contest at 40-38.

Both sides would trade points over the next few minutes, with the score sitting at 46-44 in favor of Southern Miss with 3:50 remaining.

A 5-0 run over the next 2:32 built some separation, however UTEP was not done fighting as Destiny Thurman would swish a corner 3-pointer off an assist from Erin Wilson to keep the game within reach at 51-47 with 1:06 on the clock.

Two free throws from Dominique Davis extended the advantage out to six, with the Miners then turning the ball over on the ensuing possession.

Following a timeout with 32.8 seconds left, Davis slipped and lost the ball to Brenda Fontana. In an alert move for the forward, Fontana found a slashing Wilson to her left for the layup and the foul. Wilson missed the free throw and UTEP would not score again as Southern Miss sealed the game at the free throw line.

Thurman finished with a career-high five assists in the loss and Crouse led the team with six rebounds. Gallegos and Teal Battle each had three steals.

Kelsey Jones was the leading scorer and rebounder for the Golden Eagles with 16 points and 11 boards.

UP NEXT
UTEP heads back to the road to start a home-and-home series with UTSA. The Miners will play in San Antonio on Thursday at 6 p.m. MT/7 p.m. CT. The two teams will meet again in El Paso on Sunday at 1 p.m. MT.

The Miners and Roadrunners can be heard on the UTEP Miners app with Mando Medina calling the action. The contest will also be streamed on ESPN+.