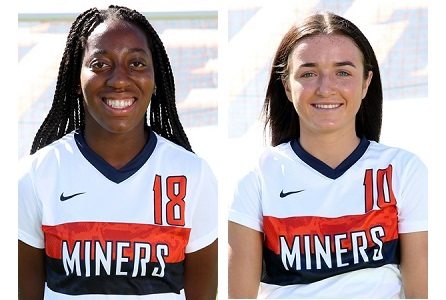 Bohdan becomes the first Miner freshman to garner a spot on an all-conference team since Aleah Davis did so in 2013 and the ninth overall in program history. It is Crenshaw’s first all-league recognition, but she was an all-freshman team member in 2016.

“We are very proud of Vic and Lauren being recognized by the Conference USA coaches and being named to the Conference USA all-conference team,” UTEP head coach Kevin Cross said. “This is a huge honor for both of these underclassmen. Both Vic and Lauren were impact players in many games this season, and probably showed up on a lot of team’s scouting reports of us. I do think the best is yet to come for both of these players as they are both going to improve this off season. We have a strong future with these two young players.”

Bohdan shared for the team lead in goals (six) while pacing it in assists (four), points (16), shots (52) and shots on goal (27). She becomes the first Miner freshman in program history to top the squad the three major offensive stat categories (goals, assists and points) for a season. Bohdan also provided two match-winning tallies.

Crenshaw was one of four Miners to start every match of the season. She helped UTEP post four shutouts while holding seven other teams to one goal. She also used her unique skillset to jump into the attack at the opportune time.

She ranked second on the team with three assists while also scoring a trio of goals, including the matchwinner at UTSA (10/27). Crenshaw also tallied goals against New Mexico Highlands (9/13) and vs. Middle Tennessee (10/15).

The Miners have now had at least two all-league honorees for seven straight seasons.