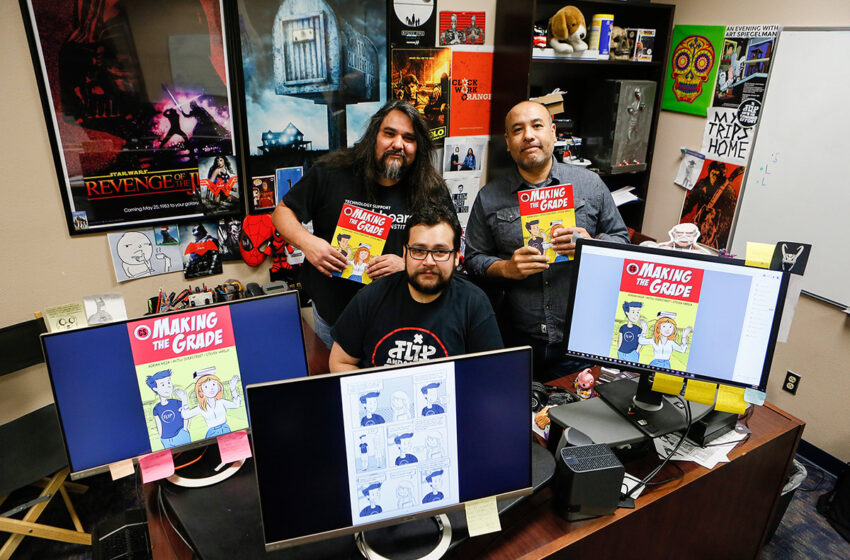 Academically, Ozzy was an average high school student. He could live with that, but he knew he needed to work harder to improve his grades so his parents would approve his going on a much-desired out-of-town summer vacation. Instead, he took the quicker, easier approach. He cheated.

Ozzy made a financial arrangement with a classmate – a known tutor – to write his papers, do his homework and use a code to help him during his exams. The plan worked for the better part of a semester, until it didn’t. When it failed, the dominos started to fall in areas no one suspected and involved more students than anyone might have guessed.

This is the premise of a fictional story produced by members of The University of Texas at El Paso’s Creative Studios for the Texas Holocaust and Genocide Commission (THGC). The Austin-based group has devoted time, talent and treasure to combat unethical behavior at the college level, and with good reason.

In “Plagiarism: Facts & Stats,” a report published in Plagiarism.Org on June 7, 2017, the author uses data compiled by a Rutgers University researcher who surveyed more than 88,000 graduate and undergraduate students from 2002 through 2011. The surveys indicate that 43 percent admitted to cheating on tests and written assignments.

“Those numbers are staggering,” said Steve Varela, associate director of Academic Technologies (AT), which oversees Creative Studios. “We can’t say whether those discretions were intentional or unintentional, but if they were intentional, it means that some people don’t take the ethics of cheating seriously.”

Those kinds of statistics are the reason why the THGC asked Varela in January 2018 to create a mini-module about academic integrity aimed at K-12 students and first-year college students. The commission, which has worked with AT since 2014, wanted to address the issue with students early in their academic lives, said Matt Verdugo, THGC executive director. He added that the commission saw this new ethics package as a bridge to future Holocaust and genocide education.

Initially, Varela and the THGC envisioned a 10-minute, live-action video about plagiarism that would be relatable to teens and young adults. Varela quickly determined that it lacked the necessary gravitas for the topic.

Adrian Meza, a Creative Studios instructional technologist, suggested last June that they send the ethics message through a nonthreatening “motion” comic book that had audio and some animation. Varela and Meza decided in August to produce a regular black-and-white comic book. Meza, who penned the screenplay for the live-action video, wrote the story of Ozzy and Daisy, the “tutor.” Varela and Meza enlisted the help of Mitsu Overstreet, a Creative Studios creative manager and art director, as the book’s illustrator. The trio produced “Making the Grade,” which tells the tale of Ozzy, Daisy and a few others at Peter N. Berkowitz High School in Anytown, USA.

“Our task was to develop a professional development module about academic integrity,” Varela said. “We wanted to create something visual and engaging and I think we succeeded.”

The electronic comic book went online on January 7, 2019. Several videos shot and produced by Meza and Janet Hill, a Creative Studios instructional technologist, as well as teaching strategies regarding the topic of academic integrity, accompanied the book. The reaction to the package has been positive.

Verdugo said the commission thought the comic and the mini-modules were great, but the other components took the learning opportunities to another level.

“What was even more impressive were the instructional strategy suggestions sprinkled throughout the mini-mods to help teachers bring these resources to life in the classroom,” said Verdugo, who said he hoped that this package would prompt students to ask themselves about their own academic integrity.

UTEP alumna Autumn Carter, an eighth-grade English teacher at Ed White Middle School in San Antonio, Texas, said the comic book was an excellent way to reach a younger audience that often does not understand the consequences of unethical academic behavior.

Carter earned her bachelor’s degree in English and American literature with a minor in African-American Studies in 2009, and her Master of Education degree as an instructional specialist with a concentration in reading two years later. She said she planned to ask her seventh-grade colleagues to create a lesson plan focused on ethics based on “Making the Grade” and its related materials.

The Las Cruces, New Mexico, native said students who cheat often struggle academically, are afraid of a parent reaction if their grades dip, or do not understand they have committed an academic transgression. She said that sometimes students pick up bad habits such as sharing social media items without stating their origins. Carter, who started her teaching career at Guillen and Richardson middle schools in El Paso, added that cheating in secondary education also could involve peer pressure of wanting to fit in and not wanting to tattle on others.

“We need to implicitly teach the rules and be pro-active before we make assignments,” said Carter, who learned about “Making the Grade” after a discussion with a former UTEP faculty member who was familiar with Varela’s project. “I think faculty members, even college professors, need to take a step back and not assume that everyone knows how to cite a source. I think teachers could be more helpful.”

Varela said his creative team has appreciated the praise for the product and for the support it received throughout the process.

Meza, Overstreet and Varela said they worked together to conceptualize the look and “feel” of the story. They shared early drafts with family members who were in college, high school and middle school. Meza said he watched the readers to gauge their reactions as they followed the story. He said the readers’ comprehended the message based on informal discussions.

“I saw how they reacted to certain ethical plot points,” said Meza, who added the book’s “soft sell” ethics message would work best for the young target population. “You could tell it resonated with them.”

Overstreet said he based the general look on “Archie” and “Tintin” comic books. He made his initial sketches on an iPad using an Apple pencil and then transferred that work onto Adobe Illustrator to complete the project. The team based the appearances of the lead characters on a combination of family members, movie actors and Meza’s high school science teacher.

While all were proud of the book, the Creative Studios team agreed that the important part was the message of academic ethics. Varela, an award-winning educator at UTEP, broke up the book’s narrative at several points with suggested reflections, dialogue points, and writing exercises based on the comic book storyline that the teacher could use to enhance the concept of academic integrity.

“The purpose of the book is to teach and learn,” Varela said. “We want ‘Making the Grade’ to be a springboard for class discussion.”