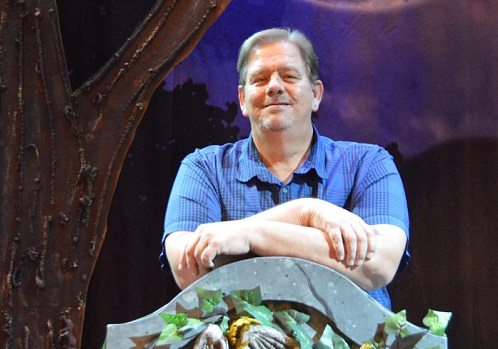 For the UTEP Dinner Theatre’s (UDT) inaugural production of “Joseph and the Amazing Technicolor Dreamcoat” in 1983, Greg Taylor’s mom stitched strips of colorful fabric together to assemble Joseph’s coat of many colors.

Back then, Taylor was a theatre arts major at The University of Texas at El Paso, and he wanted to direct a musical. At that time, the UTEP theatre department was not producing musicals, so he asked if he could use the theater to produce a musical himself. His request was denied. Not wanting to let his passion die, he came up with the idea to produce “Joseph and the Amazing Technicolor Dreamcoat” as a dinner theater event in the old Student Union Ballroom.

He and his friend Jimmy Legarreta applied for funds and received $1,000 from UTEP’s Student Programs Office to produce the show.

Tickets were $10 and dinner was an all-you-can-eat buffet. The titular coat was the production’s only costume – the rest of the cast wore jeans and T-shirts.

“We had $1,000 to do the show and $750 of that went to buy the rights,” recalled Taylor, who is now a UTEP theatre and dance associate professor. “The budget was $250 for the entire production. My mom made the coat. We borrowed scenery and had a temporary stage, and I made the tickets.”

The musical about the biblical story of Joseph, his 11 brothers, and his colorful coat was a big success and sold out all of its performances. What started out as a one-time student production set the stage for what has become one of the most successful theaters in El Paso and the only full time, year-round dinner theater on a college campus in the United States.

After that first production of “Joseph” and a follow-up production of “Jesus Christ Superstar,” Taylor was hired first as a work-study student to mount a full season and then, after graduating from UTEP in 1986, as the full-time Dinner Theatre director. For the first 15 years, the UTEP Dinner Theatre was a program of the Student Union. It is now part of the Department of Theatre and Dance.

The Dinner Theatre produces four fully staged musicals each year, giving singers, actors and dancers from UTEP and the El Paso community a chance to shine in Broadway hits like “Cats,” “Mary Poppins” and “Hair.” To date, the UDT has staged more than 150 musicals. Since 2015, the Dinner Theatre also has featured student produced musicals under its offshoot production entity, Side Dish Student Productions.

“The University’s mission is to contribute to the quality of life in El Paso, and that’s what the Dinner Theatre does,” Taylor said. “We provide an art form that, at the time in 1983, was rarely offered on campus and has proven to be very popular with audiences.”

In 2018, the Dinner Theater celebrates its 35th anniversary. To mark the occasion, “Joseph and the Amazing Technicolor Dreamcoat,” the beloved family-friendly musical that started it all, will return to the UTEP Dinner Theatre from April 20-May 6, 2018.

This time the Tony Award-nominated musical by composer Andrew Lloyd Webber and Taylor’s longtime friend, lyricist Sir Tim Rice, will feature lavish new sets and costumes for the cast and an “amazing” new coat for Joseph.

“Our priority is to put on quality productions, and that’s what people know us for,” Taylor said. “You see it on stage. We have a great staff who produce beautiful sets and costumes.”

It is this commitment to producing high-quality musicals that has made the Dinner Theatre one of El Paso’s most popular attractions.

Rick Kern, producer of the annual Border Legends of El Paso Concert, and his wife, Sharon, have been Dinner Theatre regulars for years. Their favorite productions include, “The Sound of Music,” “Cats,” and “The Producers.”

“El Paso is so fortunate to have a dinner theater like this,” Rick Kern said. “Many cities don’t have this, and those that do don’t have the quality productions that we have here. Some of these productions we’ve gone to see twice, like “The Producers,” because the quality of the show was so good that it could have been easily taken on the road.”

One interesting aspect of the UTEP Dinner Theatre is Taylor’s friendship with Rice, the Tony award-winning lyricist.

Their friendship began 40 years ago when Taylor, a self-described “Jesus Christ Superstar” freak in high school, wrote Rice a fan letter after listening to a recording of Webber and Rice’s musical “Evita.”

A welcome message from Rice prominently appears on the Dinner Theatre’s website, citing some of UTEP’s successful productions of his musicals, including the premiers of “Blondel,” “Tycoon,” “Chess” and “Lute.”

“I have seen the work of Greg and his staff personally in El Paso and have always been impressed by the standard of the performances,” Rice wrote.

One of the Dinner Theatre’s biggest productions was its 25th anniversary concert held at the Don Haskins Center in 2008. The concert, which honored Rice, featured songs from his biggest shows, including “The Lion King,” “Aida” and others performed by a cast of five Broadway guest stars and a 150-voice choir of current and past Dinner Theatre performers, accompanied by a full symphony orchestra and rock band.

A major part of the Dinner Theatre’s success is the food. Dinner performances include flavorful three-course meals prepared by Sodexo Food Services.

“We are very proud of our relationship with the Sodexo staff,” Taylor said. “It’s a 50-50 operation. People would not come to the UDT if the food wasn’t good, and they would not come to buy the food if the show wasn’t good. So both departments work together to make each performance a special occasion.”

Teamwork also plays a major role in putting on a great show. Many of the performers and technical staff have been with the Dinner Theatre from the beginning in 1983, including Mike Spence, the set and lighting designer for 35 years.

Many performers at the Dinner Theatre start out as students but continue to appear in shows for many years after graduation.

“We have two active performers today, Carol Viescas and Selena Stair, who were in our first production of ‘Joseph’ 35 years ago,” Taylor said.

Viescas was one of the show’s narrators and Stair sang in the chorus and played Dan, one of Joseph’s brothers.

“The show was so bare bones and low-tech; we performed in jeans and matching T-shirts,” Stair recalled. “I remember also playing a go-go dancer in that production – no costume change, just added a headband with beads that clacked against your teeth if you danced too wild!”

Since then, Stair has performed in 36 Dinner Theatre productions and has also directed a couple of shows. One of her most unforgettable moments was her onset meeting with her future husband, Chris Mitchell, who was working as the Dinner Theatre’s sound designer.

As the Dinner Theatre opens its 35th season, Taylor reflected on its success.

“In 1983 we never set out to start a full-time dinner theater,” he said. “We just wanted to do a show. We did, and we were lucky that the show and the dinner theater concept caught the public’s imagination. We stumbled into the formation of the UDT by accident. Thanks to the support of the UTEP administration, especially Dr. Diana Natalicio, the Dinner Theatre has grown and matured into the successful entity you see today.”