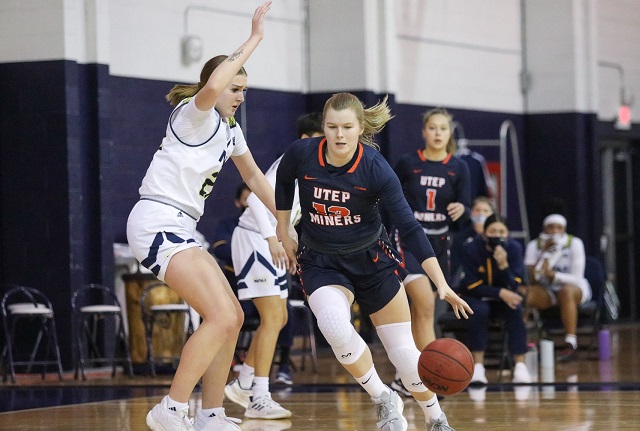 Senior forward DejaNae Roebuck scored four consecutive points at the 6:46 mark in the fourth quarter to shrink the Miner deficit to one point. However, that’s as close as UTEP got to overtaking the lead as NAU proceeded to go on a 13-2 run to push the Miners back by 12 points.

Junior guard Destiny Thurman – who started her first game as a Miner – sparked a 6-0 start to the game with an easy layup off the feed from sophomore guard Katia Gallegos. But NAU shot at a 50 percent clip from the field in the first quarter (8-of-16) with two 3-pointers to head into the second period with a 20-14 advantage.

The Miners picked up where they left off in the second quarter, shooting 60 percent (9-of-16) with two trey balls of their own. Gallegos and forward/center Michelle Pruitt were the engines of the offense with seven and six points, respectively, in the quarter. Pruitt was UTEP’s leading scorer in the game, tying a career-high 17 points.

Pruitt and Roebuck combined for 29 of the Miners’ 48 points in the paint.

Gallegos ended the first half with nine points and would be limited by the Lumberjacks to just two points for the remainder of the contest.

The Miners, entering the second half trailing by just a point, 37-36, eclipsed the lead for the first time since the first period off a Thurman step back jumper at the top of the key, 40-39, at 7:52 in the third quarter. That lead was short-lived, however, as NAU scored just 30 seconds later.

Sophomore guard Isis Lopes – who was granted eligibility Wednesday afternoon and made her UTEP debut one night later – logged her first minutes halfway into the third quarter and kept the Miners in the ball game. Lopes’ first points came off a running layup to put UTEP within one, 43-42, and her next bucket less than a minute later knotted the game, 46-46. Lopes finished the game with 10 points, two 3-pointers, three rebounds and two assists.

Next up, UTEP waves goodbye to 2020 and hello to 2021, facing Southern Miss in its first Conference USA matchup of the season on January 1 at 1 P.M. in the Don Haskins Center. The Golden Eagles have not played a game yet this year.