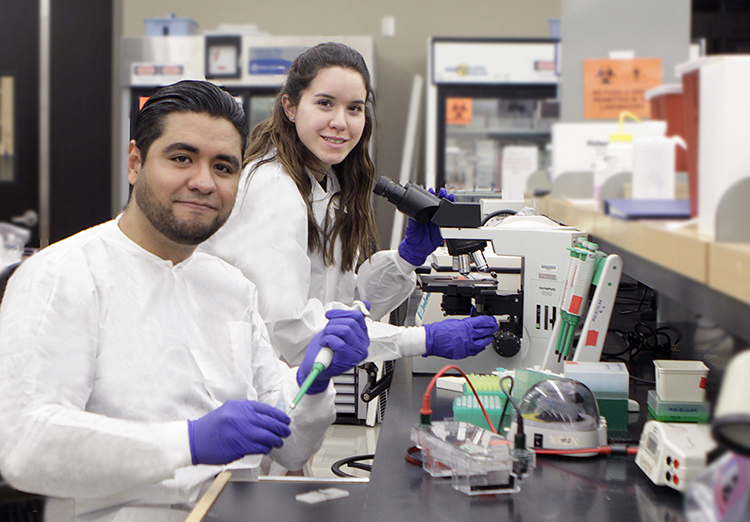 Efren Narvaez watched as the grieving family of a woman who disappeared years ago cautiously approached the stainless steel table that held her remains in Ciudad Juárez’ municipal morgue.

A few weeks before, Narvaez, a volunteer in the city’s Forensic Science Lab, had extracted DNA from the victim’s bones and hair. It matched DNA the lab obtained from close relatives, which led to the woman’s identity. At that point, lab officials summoned the family to the morgue to make a positive identification of their loved one.

“The mother was crying and she was asking me, ‘Are you sure this is my daughter? Are you sure? It’s only hair and bones,” recalled Narvaez, a senior in the Clinical Laboratory Science (CLS) program at The University of Texas at El Paso.

Narvaez looked at the distraught mother and said, “Yes. The DNA analysis that we ran and compared with your DNA says it is a match. It is your daughter.”

These medical detectives identify bacteria and viruses that cause infections and detect diseases such as cancer and diabetes. Physicians rely on this information to determine the best treatment plan for the patient. It is estimated that physicians base between 70 percent and 80 percent of their medical decisions on laboratory test data, said Lorraine Torres, Ed.D., CLS program director.

Aside from investigating illnesses, clinical lab scientists also use their analytical techniques to solve crimes. CLS students such as Narvaez plan to apply the investigative concepts they learned in the program to careers in forensic science.

“It’s like a puzzle I’m trying to solve,” said Narvaez, who earned a bachelor’s degree in forensic science from UTEP in 2015. He expects to graduate from the CLS program in May 2019. “In CLS, I’m looking for the disease, but in forensics I’m looking for the criminal. It’s almost the same process, but with a different purpose.”

With courses that include chemistry and biology, the CLS program prepares scientists with the knowledge and laboratory techniques that they can apply to forensic investigations. Students learn to process biological evidence collected at crime scenes such as blood, saliva, semen and other bodily fluids. The DNA results identify or eliminate suspects.

“Most of our program’s graduates chose to work in hospital-based labs, but CLS is also an entry point into forensic science,” she explained. “The techniques they learn in the lab can be applied in the forensic field, like analyzing body fluids for DNA evidence in a sexual assault case.”

The U.S. Department of Labor Bureau of Labor Statistics projects that employment of medical and clinical laboratory technologists and technicians will grow 13 percent from 2016 to 2026, resulting in 42,700 new jobs during that 10-year period.

A native of Juárez, Mexico, Narvaez was attracted to a career in law enforcement to help victims of the city’s drug violence. Instead of becoming a police officer, Narvaez decided on a career in forensic science in which he could combine his passion for science with public service. In 2015, he volunteered in the Forensic Science Lab to help identify unclaimed bodies found buried in the Chihuahuan Desert.

Narvaez started his CLS journey in 2017 to enhance his knowledge of laboratory techniques. He credits the program’s hands-on training and the clinical rotations in hematology, blood bank, chemistry and urine analysis at local hospitals for preparing him to become a more confident provider.

“I can use this knowledge to work not only in forensics, but in a hospital, research or any job that is related to lab and human body analysis,” Narvaez said. “In CLS, I can solve crimes and save lives.”

As part of their hands-on training, CLS students attempt to solve a murder mystery using the skills they learned in the Molecular Diagnostics Laboratory.

The exercise revolves around a fictional crime scene involving five people who are suspects in the fatal stabbing of a wealthy victim. Students analyze blood, hair and a cigarette butt found at the scene to identify the perpetrator.

Students process DNA collected at the crime scene through a procedure known as Polymerase Chain Reaction (PCR). They examine the PCR results using a technique called agarose gel electrophoresis, which allows them to compare each suspect’s DNA and identify the assassin.

“This is a fun way for them to apply all these techniques that they learn in the molecular lab and to see how they can be applied in forensic science,” said Elizabeth Camacho, CLS clinical coordinator and community outreach coordinator.

Stephanie Castillo, a CLS senior, has helped Camacho coordinate the crime scene scenario since 2016. At the time, Castillo was majoring in forensic science. She read about the CLS program online and wanted to check out the program before switching majors.

“The people at the crime scene have to look at all their surroundings, not just where the (incident) happened,” Castillo said. She plans to build up her experience working in a hospital laboratory before applying to a law enforcement agency like the FBI. “We picked up hair samples, anything that can have DNA on it, and we went back to the lab and that’s how we figured it out. But this is something that could definitely happen in real life. I’m glad that we can help solve those mysteries.”

Brenda Baca participated in the crime scene scenario during the summer 2018 semester. While she values the hands-on opportunities the program provides, she is more interested in investigating infectious diseases than murders.

Baca, who graduates in May 2019, plans to attend medical school in 2020. In the meantime, she intends to work in a hospital lab detecting illnesses and helping patients from behind the scenes.

“I wanted a hands-on career and in CLS we really do that,” Baca said. “What I like is that in CLS I get to see the clinical part, like diseases and learn about symptoms and medications. But we also get to see the science, the molecular part (of the disease). I like the combination.”