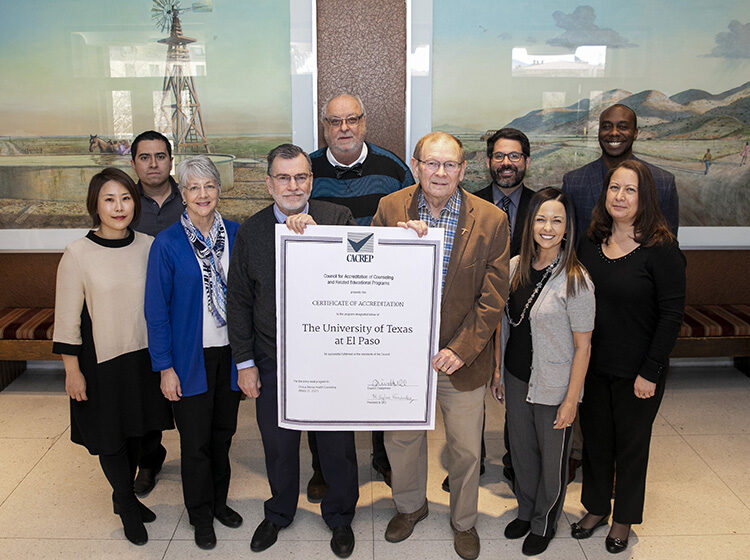 The Council for Accreditation of Counseling and Related Educational Programs (CACREP) recently granted The University of Texas at El Paso’s Mental Health Counseling Program accreditation through 2027.

An enthusiastic Rick Myer, Ph.D., professor and chair of the Department of Educational Psychology and Special Services, which oversees the program in the College of Education, called CACREP’s acknowledgement “an honor.” While it is not unheard of for a program to earn an eight-year accreditation in its first attempt, it does not happen often, he said.

The administrator praised University and College of Education administrators as well as his faculty, staff and students who worked as a team to achieve this highly coveted designation. He said this accreditation gives the program national stature and positively reflects on the instructors and the curriculum, as well as the graduates as they pursue academic and professional opportunities. He said students would be the biggest beneficiaries because employers want graduates from CACREP-accredited institutions.

“This will give our students a lot of opportunities that they would not have had previously with respect to mobility and recognition from the counseling profession, and that includes here in El Paso,” Myer said. “We have met the national standard and that’s a big deal. Actually, this is bigger than a big deal.”

The news excited Carmen Vázquez-Villanueva, a mental health counseling graduate student who spoke to members of the CACREP on-site evaluation team during their visit in July 2018. The El Paso native highlighted to the team the program’s strengths such as curriculum, experiential learning and its dedicated faculty.

As to the accreditation, the first-generation college student said she understood the positive impact it has on students’ preparation for the National Counselor Examination, applications for doctoral programs, and obtaining professional licensure, all of which affect future job prospects.

“We are all overjoyed that we have received the highest level of accreditation possible set by the profession,” said Vázquez-Villanueva, who earned her bachelor’s degree in psychology from UTEP in 2014. “This ensures us that we are prepared to go out into the counseling field with solid professional skills as practitioners.”

“This is indeed a worthy achievement,” Fernandez wrote.

Clifton Tanabe, Ph.D., dean of the College of Education, said he was very pleased that the mental health counseling program obtained this national accreditation.

“The fact that we earned an eight-year accreditation is a testament to the diligence of Rick Myer and his team,” Tanabe said. “Their efforts have strengthened the program and enhanced its ability to serve this region and beyond.”

Myer hired Richard C. “Craig” Williams, Ph.D., associate professor of counseling, to become the CACREP accreditation liaison and to lead the program’s accreditation team in 2013. Myer and Williams previously worked on a number of successful accreditation efforts at other universities.

“That experience helped because we knew where the challenges might be,” Myer said. “This helped us to address any possible issues before they could become a problem.”

The process started with a self-study where Williams’ team compared the program with accepted national standards. The report found the program to be sound, but in need of some structural modifications to meet accreditation standards. That meant enhancements to various policies, procedures, handbooks, faculty-to-student ratios, practicums and internships, and contracts and experiential learning site supervision specifications.

Williams, like Myer, praised the department’s faculty members for their help. For example, instructors willingly provided student learning outcome data that the program reviewed, which guided necessary program revisions and modifications to be in compliance.

“No one person can do this without everyone doing their part,” Williams said.

Williams said members of the evaluation team visited the program’s field sites and returned impressed by the student involvement and the feedback from community partners.

“They knew we had a solid working relationship with our sites and, as a result, our students were getting the training they needed,” Williams said.

One of the professionals the evaluation team questioned during their site visit was Celeste Nevarez, clinical program manager with Emergence Health Network (EHN) and one of the department’s adjunct professors. The El Paso native is a licensed professional counselor supervisor who graduated from a CACREP-accredited program in Arizona.

Nevarez said she and Williams discussed the program’s accreditation efforts in 2015 and he asked her to be part of his team. She joined EHN two years later. She has worked to ensure that UTEP student interns receive a wide spectrum of mental health treatment experiences, and learn how to create inviting trauma-informed care and environments.

“The fact that UTEP got an eight (year accreditation) is massive,” she said. “It shows the work that we’ve put into that program. It’s pretty impressive.”

The EHN manager said the CACREP representatives were able to see that the internships provided students with a robust exposure to clinical experiences where they applied their knowledge in an ethical and practical manner.

“The auditors looked us up and down, and we were happy to oblige,” said Nevarez, who recalled that they had access to EHN’s play therapy rooms, curriculum library and on-site trainings. “We aren’t in business to mass produce graduates. Our goal is to graduate refined therapists.”

This is the second UTEP program to earn a CACREP accreditation. The Master of Rehabilitation Counseling (MRC) program in the College of Health Sciences earned it in 2013. Myer, who is the program’s co-director this academic year, said the MRC has started its reaccreditation process. That team is collecting data and revising handbooks. UTEP could submit its first report to CACREP as early as 2021.

Myer said the school counseling program, which also is in his department, plans to seek CACREP accreditation in the future. He said he expects the accreditation to take several years.