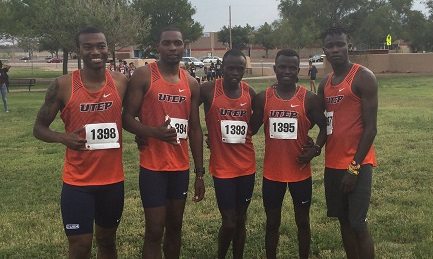 The UTEP cross country team is set to travel to the Midwest this weekend to compete at the 62nd-annual Joe Piane Notre Dame Invitational in South Bend, In.

The University’s Burke (9-hole) Golf Course will host a total of 51 schools for five races beginning at 11:00 a.m. (MT) on Friday.

This will be the biggest meet of the season thus far for the Miners. The men will take on schools ranked in the top-25 in the nation by the U.S. Track and Field and Cross Country Coaches Association (USTFCCCA).

The women’s team will take the course first in the blue division running a 5K race. Making the trip up north will be Lilian Koech, Andrea Lucero, Winny Koech, Carolyne Chepkosgei, Destiny White and Linda Cheruiyot. Lilian Koech is the defending champion. She won last year’s staging by clocking a time of 17:15.6 in running against a field of 222 competitors.

Winny Koech and Cheruiyot return for their second career showing at the Notre Dame Invitational. Cheruiyot crossed the finish line with a time of 17:41.9 to finish 20th overall, followed by Koech (18:02.5) in 46th overall.

Making their first trip to the Hoosier State will be three newcomers for the Miners Lucero, Chepkosgei and White.

The women’s team will face nationally the University of Colorado, who are ranked No. 1 in the nation, along with No. 3 New Mexico, No. 7 North Carolina State and No. 9 Arkansas.

On the men’s side, the team will run an 8K race in the blue division starting at 11:45 a.m. The Miners will compete against nationally-ranked No. 4 Colorado, No. 11 Washington State and No. 13 Southern Utah and 17 other schools.

Junior Antony Kosgei will make his third appearance at the Notre Dame Invitational after a top-10 finish last year finishing with a personal-best time of 23:55.0. Joining Kosgei will be freshman Cornelius Kapel. Kapel has won his last two meets, the last being the NMSU Kachina Classic where he clocked a winning time of 21:21.34 in the 7K.

Asa Guevara and Alejandro Alcazar will make their cross country debut for the Miners.