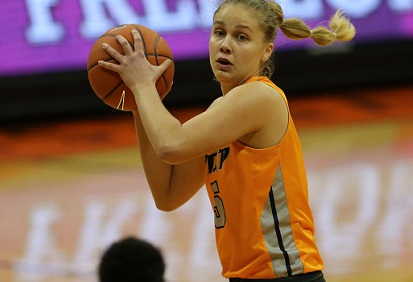 There were six ties and eight lead changes, with the final with coming during a 9-0 Miner run in the fourth quarter. The surge, which spanned roughly five minutes, turned a 41-36 deficit into a 45-41 advantage. UTEP never relinquished the lead from that point. The biggest shot was a 3-pointer by Neidy Ocuane, which proved to be the lone triple (1-20) of the game for the Orange and Blue.

CSUB did fight back to tie the contest, 47-47, but the Miners pitched a shutout over the final 2:18. Katarina Zec connected on 6-8 at the charity stripe in that sequence to give the home side just enough to pull out the win. Zec finished with nine points and eight boards to support Puc, while Jordan Alexander contributed eight points and a quartet of rebounds. Sophomore Jordan Jenkins added six points and a career-high tying five boards.

The Roadrunners were led by 13 points and 12 boards from Malayasia McHenry. CSUB’s Alexxus Gilbert and Jazmine Johnson were held to a total of 14 points on a combined 4-16 shooting. The duo entered the contest contributing 29.5 ppg on a combined 22-49 from the floor.

“I’m just so proud of the toughness of our team,” UTEP head coach Kevin Baker said. “The fact that we were 1-20 (on 3-pointers) would deject most teams, but our team continued to defend and held them to nine points in the fourth quarter. We were down five and the momentum was not going our way, but the team collectively stood up and played a pretty good defensive game. We won the game on the boards. I’m just really pleased with our effort and with our fans. I thought they helped us when we needed a momentum shift. I thought they were there for us, and we really appreciate that.”

It was a defensive battle from the onset, as CSU Bakersfield led, 8-6, with two minutes to play in the opening quarter. The Miners found a bit of rhythm down the stretch, closing the frame on a 7-1 push to secure a four-point cushion (13-9) through 10 minutes of action. Zec started it with an old-fashioned 3-point play, which was followed by a twisting lay-up from Jenkins. Jenkins then capped off the surge with a pair of free throws.

The Roadrunners struck back with a 5-0 run over the first 32 seconds of the second quarter. CSUB remained up by one (18-17) with 6:46 left in the quarter before back-to-back baskets by the Orange and Blue put them back into lead (21-18). The margin at the break was four (25-21) in favor of the home side, with the Roadrunners being held to two points over the final three minutes.

UTEP continued to lead, 32-29, with 6:28 remaining in the third quarter before CSUB closed the period on a 9-2 push to secure the aforementioned four-point cushion (38-34) heading to the final frame. The deficit extended to five (41-36) with 8:07 to play before the Orange and Blue rallied back. Freshman Ariana Taylor pitched in four points in the stretch, including an offensive rebound and putback to get the Miners within one. That was followed by a jumper from Jordan Alexander before Ocuane sank the trey.

The Miners will have a quick turnaround, as they play host to NM State in the FirstLight Federal Credit Union Battle of I-10 at 1 p.m. MT Saturday. Tickets are $5 for adults and $3 for kids, and may be purchased by calling (915) 747-5234.