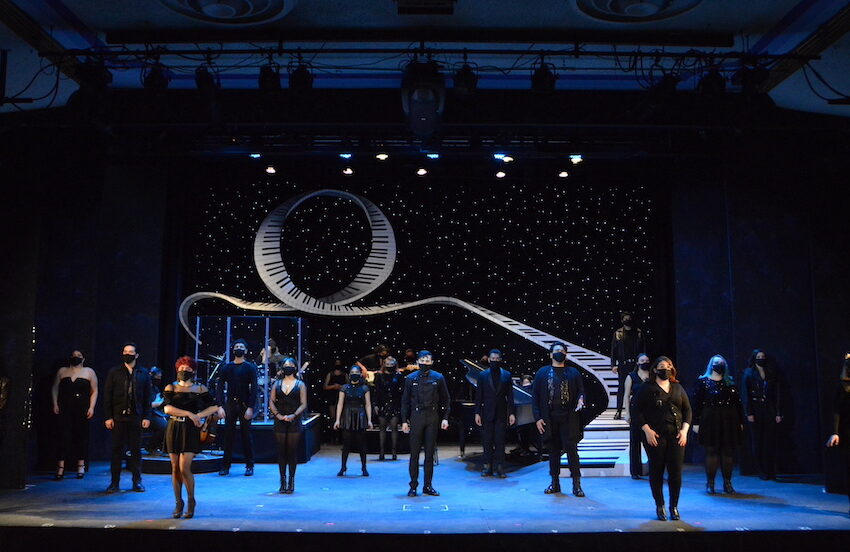 When the UTEP Dinner Theatre (UDT) produced “Broadway in Concert” on February 6, 2021, the producers were unsure how interested people would be in a free virtual show that offered live performances of popular showtunes. The answer surprised and humbled them.

Greg Taylor, UDT director, conceived the idea as an opportunity to showcase the talents of music theater majors at The University of Texas at El Paso, but also as a fundraiser to help with student scholarships.

While optimistic about the production, he was less sure of the audience appeal. He expected about 300 viewers and maybe $1,000 in donations. Instead, more than 1,400 people logged into the hour-long show – in reality there probably were many cases where more than one person watched the show from any one locale – and those spectators donated $12,550.

“I vastly underestimated,” a grateful Taylor said a few days after he shared the final numbers with UTEP officials. “We received hundreds of great comments from those who watched and a lot of them must have really enjoyed it since we raised far more money in donations than we expected. It tells us we put on a really good show.”

Jake Logan, UTEP’s vice president for Institutional Advancement, complimented the event’s organizers for hitting the right notes with fans and donors. He called the show and its outcome “outstanding.”

“Staying in touch with my colleagues at institutions all over the country, many have been struggling to figure out the fundraising part of remote events whether it’s about theater performances, alumni events or museum exhibitions,” said Logan, who added he might use a similar idea in a future University fundraiser. “Greg and his team clearly found the formula.”

John Wiebe, Ph.D., provost and vice president of academic affairs, also was impressed with the effective UDT event. He said he only has anecdotal experience with other art groups that tried fundraisers during the pandemic, and the dinner theatre’s effort was the most productive.

“The pandemic has required a lot of hard work and ingenuity from our faculty, staff, and students,” Provost Wiebe said. “This is especially true in the performing arts, where cues from live audiences and fellow performers are so important. We’re very proud of Greg’s leadership and the contributions of everyone who made this effort successful.”

Taylor said he came up with the virtual “Broadway” concept a few months into the pandemic. It was to focus on the voices who would sing 15 popular numbers from such productions as “Wicked,” “Aladdin,” “Chicago,” “Hamilton,” “The Lion King,” and “The Greatest Showman.” The UDT leadership team decided early on that the show would be broadcast live to give the audience an “in-theater” feel. Many theater groups around the country were doing taped Zoom versions of concerts and plays, but Taylor wanted this production to be done in real time.

The initial rehearsals in the fall were online. Twenty of the 21 cast members were current music theatre majors. The other earned his theatre arts degree in December 2020. Taylor started in-person rehearsals in December. Altogether, the cast worked on their vocals and choreography about 80 hours to prepare for the one-night event. The performers wore their face masks and were socially distanced on stage when necessary. All wore different outfits in various shades of black.

Performing live “added a lot of technical requirements and caused a great deal of concern, but in the end it all came out good,” Taylor said. “I was a nervous wreck the whole time.”

One of the outcomes that pleased Taylor the most was that donors provided the dinner theatre with the necessary funds to provide around 15 UDT Patron Scholarships, which range from $500 to $1,000. They are awarded to registered UTEP students with a minimum 2.5 GPA who are active in dinner theatre productions as actors or technical crew members. The UDT staff decides the recipients.

Among past UDT scholarship beneficiaries is Hannah M. Perches, a senior who plans to graduate in May 2021 with a Bachelor of Fine Arts degree in performance arts with a concentration in musical theatre. She is a UDT veteran who has performed in several shows since 2018 to include “Dogfight” and “Saturday Night Fever.” She performed in the “Cell Block Tango” from “Chicago” and “World Burn” from “Mean Girls” in the recent show.

Perches, an El Paso native, said the students involved as cast and crew worked hard and were grateful to be acknowledged and appreciated for their efforts. She called the production a great experience and said the viewers’ supportive and positive comments inspired her.

“It was kind of like a breath of fresh air because it’s been about a year since I’ve been able to be part of a production,” said Perches, who added that she began to question whether she should continue to perform. “Being back on stage and working with everyone again made all of that second guessing go out the window.”

Shari and Stuart Schwartz, supporters of the UDT since it was founded in 1983, said they were happy to donate to the dinner theatre. Shari Schwartz stated that every aspect of the theater’s live productions was enjoyable and the “Broadway” presentation was just as great.

Shari Schwartz, whose 36-year-old son participated in UDT productions when he was in middle school, said she and her husband always have been impressed with the UDT’s caliber of talent.

“Stuart and I think it is very important to support our community and the local talent that El Paso has to offer,” she said. “UDT is no exception. It is one of the jewels of El Paso. We miss live theater and were very impressed with ‘Broadway in Concert.’”

Taylor said the UDT has no immediate plans to do another virtual show. His focus is on the upcoming live performances of “Nunsense,” a musical comedy scheduled June 25-July 18, 2021.