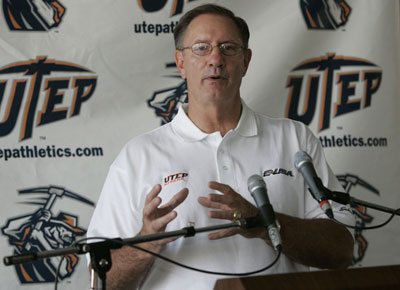 Bob Stull, who initiated widespread achievement and growth as UTEP’s Director of Athletics since 1998, announced his retirement on Thursday.

“We are very grateful to Bob Stull for his decades of service to UTEP that have generated tremendous growth in our athletics program,” UTEP President Dr. Diana Natalicio said.  “He has expertly guided UTEP through the ever-evolving landscape of collegiate athletics, and both the University and the El Paso region have greatly benefited from the significant improvements made during his tenure.

According to 600ESPN El Paso, Stull will remain until his replacement is hired.

“Successfully promoting the addition of such outstanding facilities as the Larry K. Durham Sports Center, the Foster•Stevens Basketball Center, and the Helen of Troy Softball Complex, he has helped elevate UTEP’s image and enhanced the experiences of our student-athletes, staff, fans and visiting teams,” Natalicio said.  “We are very proud that Bob has built a program that so effectively develops our student-athletes into well-rounded future leaders by focusing on academic achievement and community service. He is a great leader who has made a lasting impact on UTEP, and we will all miss him.  We wish him and Kim good health and happiness.”

UTEP also claimed a combined 19 conference titles in cross country and track and field, and one each in men’s and women’s golf under Stull’s leadership.

UTEP student-athletes have also excelled off the field during his tenure.  Over 600 have graduated from the university since the Miners made the move from the WAC to Conference USA in 2005.  In 2016, a school-record 154 Miners made the Conference USA Commissioner’s Academic Honor Roll with grade point averages of 3.0 or higher.

UTEP also had dual finalists for NCAA Woman of the Year in 2010 (Stacie Townsend, softball) and 2016 (Cameasha Turner, women’s basketball).

Stull oversaw widespread improvement to UTEP’s athletics facilities since taking the helm of the program.  Construction was completed on the Larry K. Durham Sports Center, the Foster•Stevens Basketball Center and the Helen of Troy Softball Complex, and renovations were performed on all existing venues.

UTEP’s football coach from 1986-88, Stull led the Miners to 21 victories and the only 10-win campaign in school annals in 1988.  He returned to the Sun City a decade later and immediately implemented a plan to renew El Pasoans’ interest in Miner athletics.

First, a new family of logos was introduced, resulting in a 500 percent increase in product sales the first year.  Then, ticket prices were adjusted and Miner Town was introduced to attract more families to football games.  In 2005, UTEP set a school record for attendance in the Sun Bowl with 47,899 fans per game.

Stull took over an athletic program that was on NCAA probation for 10 years and has steered it clear of major NCAA violations since.

What They’re Saying About Bob Stull

Keitha Adams Former UTEP Women’s Basketball Head Coach – Current Women’s Basketball Head Coach / Wichita State University “I’ve got so many great memories and special moments from my time at UTEP.  I really appreciate Bob believing in me and offering me a job from the junior college ranks.  He saw something in me and thought I could do it, and I will always be grateful for that.  He was always so supportive while I was there.  I always admired how he handled things during the few adverse times that we had.  I was always impressed with how levelheaded he was.  He cared for the kids and he was great to work for.  It’s very special and unique that I got to work for the AD who hired me for 16 years.”

Dr. Lisa Campos Vice President for Intercollegiate Athletics Northern Arizona University “Bob was incredible to work for.  He took a chance on me, and I owe him a great deal for the opportunities that he provided and the doors that they opened.  He has done a tremendous job at UTEP while always serving student-athletes.  The coaches that he has hired have enjoyed tremendous success, and he really had a knack for developing staff as well.  It’s really remarkable to look at the people who worked for him and what they’ve gone on to do.”

Larry Durham Former UTEP Football Letterwinner and Athletics Donor“Bob brought an exceptional amount of organizational skills to UTEP Athletics and got alumni excited about supporting the Miners.  And while UTEP has always been on the map, whether it be for its achievements in basketball or track and field, he expanded our horizons by making us look at the entire athletic program as a part of the living function of the university.  UTEP will miss coach Stull, and he will be remembered for quite some time.”

Tim Floyd UTEP Men’s Basketball Head Coach “I am happy for Bob and Kim.  He has been a credit to his profession as both a coach and Athletic Director.  I admire the hires that he’s made, and more importantly the space that he’s given the staff to do the jobs that he hired us to do.  Everyone is aware of the tremendous upgrades he made in facilities for all our sports.  Like his predecessors, he made UTEP a better place than what he inherited.  I would guess that our sports teams have to be at the very top of the list nationwide in terms of operating without NCAA probation over the last 20 years.  He will be missed.”

Sean Kugler – UTEP Football Head Coach “Bob has been a great friend, mentor and boss.  I have the utmost respect for him not only for what he has done for me, but UTEP as well.”

Judy MacLeod Commissioner – Conference USA “It is hard to put in words how much Bob has meant to college athletics and the positive impact he has had on so many student-athletes, coaches and administrators.  I feel very fortunate to call him a colleague and dear friend.  While I am happy for Bob, Kim and their extended family, his thoughtful, experienced contributions and tireless efforts to improve not only UTEP’s program, but Conference USA and college athletics will be sorely missed.  Bob’s ability to combine compassion and class with his competitive spirit has been a tremendous example for all of us and we are grateful for his leadership.”

Mike Price UTEP Football Coach (2004-12) “He’s the best athletic director that I have ever worked with.  What he’s done here, taking the athletic program to a new level, is amazing.  He did it as a coach in football, and he’s done it as an administrator.  He’s built first-class facilities and hired exceptional coaches.  He does things the right way.  The student-athletes are doing well academically and they are respectful.  UTEP has a lot of respect in the community.  He gets along really well with the administration.  I have never seen an athletic director who goes to as many athletic events as Bob Stull.  He knows all the student-athletes.  I really respect him a lot.  He’s really a good person, a good husband, a good father and a good boss.  He’s going to be hard to replace.”

Stephanie Rempe Deputy Director of Athletics – Texas A&M University “I am indebted to Bob for taking a chance on me as a young, inexperienced administrator.  Bob has been an incredible mentor, trusted voice and friend to me and to so many others and his accomplishments over a lifetime of service to student athletes is well documented.  I am thrilled that he and Kim will have the opportunity to return to Missouri to be closer to their grandchildren.  Although Bob will never slow down, I wish him only the best in ‘retirement’.”

Mack Rhoades Vice President/Director of Athletics – Baylor University“Bob has meant a lot to me personally.  He has been a mentor and a friend.  I wouldn’t be in the position that I’m in today without him and the opportunity that he gave me at UTEP.  He really transformed UTEP Athletics and did a great job of coming in there and helping take it to the next level.  As both a football coach and athletic director, Bob has certainly had a tremendous impact on college athletics and developing young people.”

Jon Teicher Assistant Athletic Director for Broadcasting / “Voice of the Miners” – UTEP “I’ve had the great fortune to work with Bob for more than 20 years, and have always believed that there’s no one I would rather work alongside. His numerous contributions to UTEP, first as head football coach and now as Director of Athletics will long be discussed and remembered.”

Russell Vandenburg UTEP Athletics Donor  “I don’t think anybody has made a bigger impact on UTEP Athletics than Bob.  He has lifted the program to an unbelievable level, not just from a competitive standpoint, but academically and with no NCAA violations.  A lot of people take these things for granted, but it’s not like that everywhere.  He has done a wonderful job.  He has worked hard to get where he is.  Now he gets to be around his grandchildren, and I think that means a lot to him.  We’re going to miss him.  He’ll be hard to beat.”