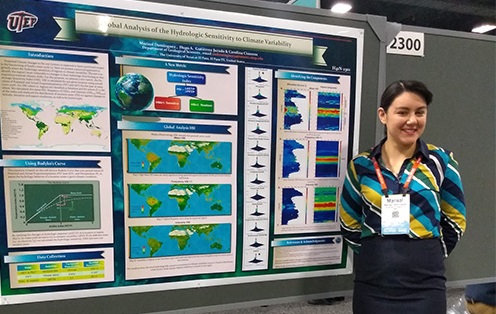 A doctoral candidate from the College of Science at The University of Texas at El Paso continued a string of successes for UTEP students at the annual meetings of the American Geophysical Union.

“I am humbled and deeply honored to receive this prestigious award from the American Geophysical Union,” Dominguez said. “Water is clearly a vital resource and understanding the effects of climate variability on its availability is an important facet of research as we move deeper into the 21st century. UTEP has provided an excellent environment to foster this research and for my development as a scientist. I am grateful for the support of faculty members and colleagues — particularly my mentor, Dr. Hugo Gutierrez — that have made a strong impact in my career.”

The OSPA program gives student presenters the opportunity to hone presentation skills and receive valuable feedback from scientists and industry professionals. The AGU is an international conference for earth scientists, consisting of more than 62,000 members from 144 countries.

AGU’s activities are focused on uniting esteemed scientists throughout the world to share scientific advancements in all disciplines of the Earth sciences, including geophysics, hydrology, geochemistry and oceanography.

Dominguez is the second UTEP student from the hydrology research laboratory in the Department of Geological Sciences to win the award during the last two years. Lupita Alvarez won during the fall 2017 annual meeting.

The American Geophysical Union’s Outstanding Student Paper Award was presented at their gathering in December.