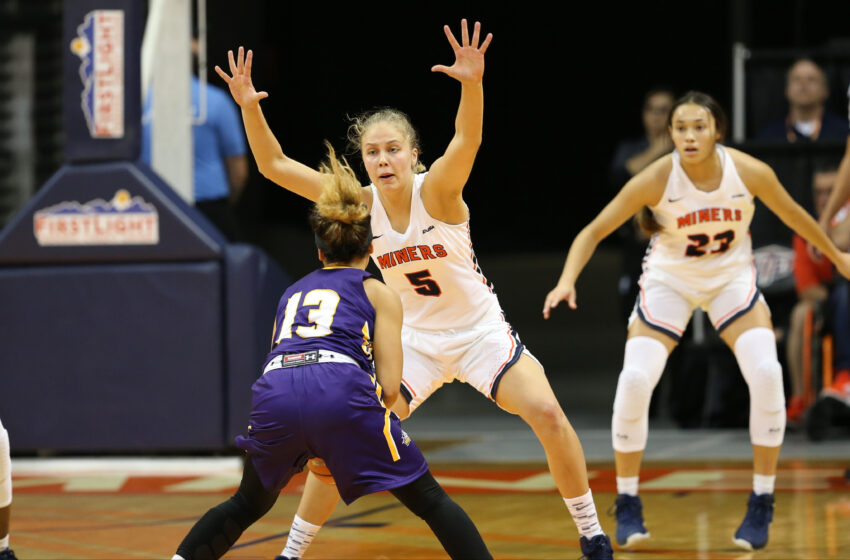 Zuzanna Puc poured in 18 points to pace a quartet of players in double figures as the UTEP women’s basketball team cruised to a 77-51 season-opening win against Alcorn State at the Don Haskins Center Saturday evening.

Redshirt-junior Ariona Gill (15 points), sophomore Jordan Jenkins (career-high 11 points, six assists) and Katarina Zec (11 points, personal-best tying nine rebounds) also got after it for the Miners (1-0). UTEP connected on 52.6 percent (30-57) from the floor, tied for the sixth-best rebounding margin (+27, 48-21) in program history and racked up 23 assists on 30 made field goals.

Freshman Conchi Satorre pitched in five points and a trio of boards in 10 minutes of action to lead the reserves in scoring.

“We definitely got better today,” UTEP head coach Kevin Baker said. “Our team improved. We were not perfect, it’s your typical first game of the year. Sometimes in your first game of the year you’re going to have 27 turnovers. I’m not proud of that, I’m not excited about that. But there’s way more positives out there that we can build on. We’re looking forward to CSU Bakersfield (on Wednesday).”

The Miners improved to 2-0 in season openers under Baker. They are now 25-20 all time in campaign lidlifters, including 21-8 when doing so in El Paso.

Alcorn State scored the first two points of the contest on a jumper, but UTEP punched back with a 12-0 surge over the next five minutes. Jenkins capped the run with a corner triple. The Lady Braves regrouped with an 8-2 push to get within four (14-10). A free throw from Neidy Ocuane and a triple by Gill sent it back to eight (18-10) before a late score from ASU made it 18-12 through 10 minutes of action.

UTEP started to open things up in the second quarter, ripping off six consecutive points to vault ahead by 14 (30-16) with 3:49 left in the frame. It was back-and-forth the rest of the way, with the Miners settling for a 12-point cushion (37-25) heading to halftime.

UTEP used a big run at the onset of the third quarter, essentially putting the game away in the process. The Miners unleashed a 16-2 surge to extend their advantage to 26 (53-27) with 5:26 left in the frame. ASU finally got on track a bit, allowing it to trim the deficit to 21 (60-39) heading to the fourth quarter.

It was a mere formality in the final frame, with UTEP extending its advantage to as many as 29 (72-43). Aiding in that was a 12-2 run, which was capped by a 3-pointer from Satorre.

UTEP will continue its season-opening five-game homestand when it plays host to CSU Bakersfield at 7 p.m. Wednesday. Tickets are $5 for adults and $3 for kids, and may be purchased by calling (915) 747-5234.