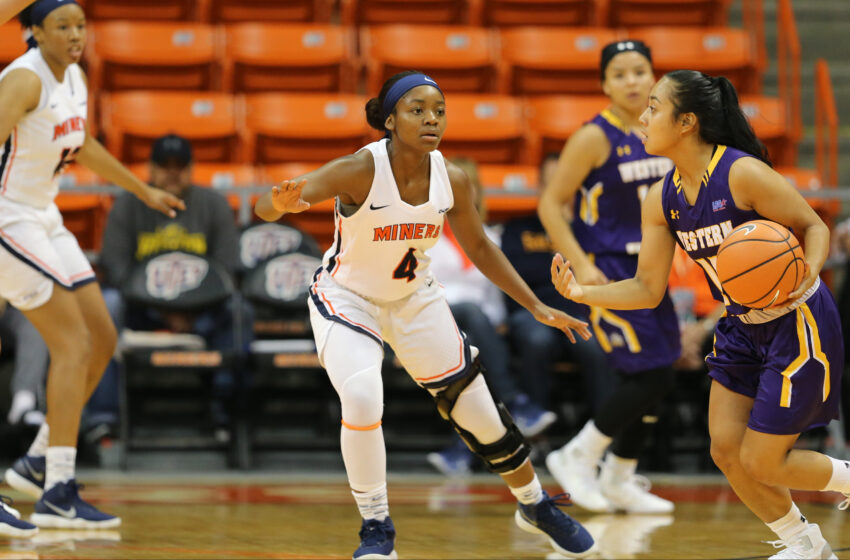 “I’m really proud of this team. We are truly seven strong,” UTEP head coach Kevin Baker said. “Today was a tough match-up; they battled us the whole way. FIU has a lot of veterans and they’ve improved a lot since the beginning of the year. I just really like the way we’re playing right now. We’re playing good, competitive winning basketball right now.”

The Miners’ (6-18, 3-8 C-USA) second straight win secured the sweep on the trip to the “Sunshine State,” with UTEP having posted its second-biggest road conference win in program history (70-44) at FAU (2/7/19) just two days prior.

FIU jumped out by five (7-2) midway through the opening frame. The Miners countered by wrapping a 16-7 run around the quarter break to surge into the lead (18-14), one they would never relinquish. UTEP countered every Panthers’ push and survived some serious foul trouble to secure back-to-back victories for the first time since starting the season at 2-0.

Making the feat even more impressive is that UTEP dressed just seven players for the fifth consecutive contest. It also navigated through Puc and Ariana Taylor both picking up their fourth foul of the contest with more than seven minutes to play in regulation.

Overall the Miners were ahead or tied for 32 minutes in the contest, including being up by as many as nine (32-23) early in the third quarter. FIU’s biggest advantage was five, but it didn’t hold a lead after the first quarter.

Puc poured in 17 in her points in the opening half before being saddled with foul trouble. She had 10 alone in the first quarter, helping keep UTEP in the game (12-12) before her other teammates got things going.

Zec had 10 of her 16 after the break, while Ocuane had eight of 14 in the stretch as well. Jordan Alexander finished with six points and six points in 34 gritty minutes while Jade Rochelle pulled down five rebounds and sank two free throws. Ariona Gill chipped in two points and four boards and Taylor had three assists, three rebounds and a key free throw late.

UTEP registered 12 assists on its 18 made field goals, including a team-high five helpers from Zec. The Miners excelled at the charity stripe, making 16-20, while also winning the rebounding battle (36-30). Puc recorded a team-best nine rebounds while Alexander (six), Zec (six) and Rochelle (five) also got after it on the glass.

UTEP also defended well, holding FIU to 36.4 percent shooting (20-55). The Panthers were paced by Paula Orenes (game-high 21 points), who made 5-of-12 from distance. She was buoyed by the double-double (10 points, 11 rebounds) of Ce’Nara Skanes.

FIU scored the first four points of the game on the way to leading by five (7-2) with 5:14 to play in the opening quarter. UTEP started to battle back behind the play of Puc. The Miners finished the quarter on a 10-5 push to pull even (12-12) through 10 minutes of action. Puc was simply sensational in the quarter, accounting for 10 of UTEP’s 12 points in the period. She was 4-5 in the quarter, including 2-2 of distance, to single-handily keep the Miners in the contest.

Ocuane got herself going early in the second quarter, hitting triples on consecutive possessions to conclude the 16-7 run wrapped around the quarter break. The two sides traded scores over the next several minutes, with the Orange and Blue clinging to a two-point advantage (23-21) with 3:18 left in the half after a layup from the Panthers’ Skanes. UTEP created some much-needed space by closing the period on a 7-2 surge to carry a seven-point lead (30-23) into the locker room. Fittingly Puc provided five of the points, including a triple to beat the buzzer, putting her at 17 points over the opening 20 minutes.

UTEP scored on its opening possession of the third quarter, affording it the aforementioned nine-point cushion (32-23). The Panthers battled back, whittling the deficit down to four (42-38) late in the quarter before Gill sank a pair of free throws to give the Miners a bit of breathing room (44-38) heading to the final frame. Twice FIU inched within three in the final quarter, but UTEP didn’t let the Panthers get any closer.

The Miners will lock up with LA Tech on Valentine’s Day (2/14) at 7 p.m. MT Thursday. The game is the first of three straight and four of five in El Paso to close out the regular season. The contest will be broadcast locally on 600 ESPN El Paso with Steve Kaplowitz and Traci Miller on the call. There will also be a live stream on CUSAtv.com (subscription based). Tickets are $5 for adults and $3 for kids, and may be purchased by calling (915) 747-5722.