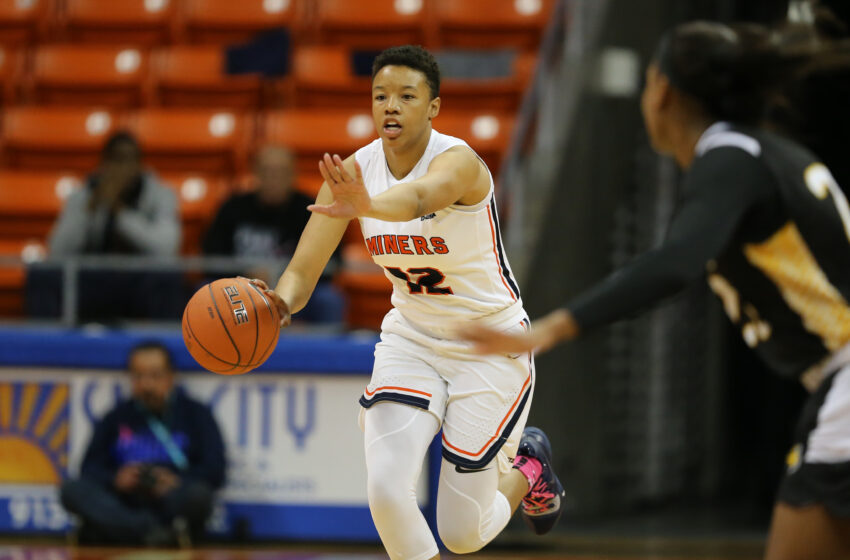 UTEP shot 52.6 percent (20-38) from the floor, including nailing 10-17 from distance (58.8 percent), but it was a triple by Alarie Mayze of Southern Miss with 1.9 seconds left that proved decisive in a 64-63 setback for the UTEP women’s basketball team at the Don Haskins Center Saturday afternoon.

“This team is just behind the eight ball, snake bitten, whatever phrase you want to use,” UTEP head coach Kevin Baker said. ”We deserved to win this game. We made somebody make a 3-pointer who has made two all season. I’m proud of our team. We were exhausted before the game ever started. The fact that we came out and played as well as we did is just a testament to their character, but there are no moral victories in college basketball. You’ve got to close out games, and we haven’t done that how we needed to.”

It was a back-and-forth game featuring five ties and six lead changes, with the Miners (6-20, 3-10 C-USA) up by two with eight seconds left after an Ariona Gill free throw. The second free throw attempt rimmed out, and the Lady Eagles (15-11, 7-6 C-USA) got the rebound and raced down the court.

Shonte Hailes drove and then set up Mayze, who entered the contest 2-17 on 3-point shots this year, for the game winner. UTEP called timeout to advance the ball only to commit one of its 22 turnovers in the game to seal its fate.

In addition to shooting it extremely well, the Miners also won the boards (31-29) against the top rebounding team in C-USA. USM was able to overcome that by converting the 22 UTEP giveaways into 28 points while connecting on a solid 42.4 percent (29-59) from the floor. The Lady Eagles also enjoyed advantages for points in the paint (32-18) and second-chance points (13-5).

It marks the seventh home setback of the season by four points or less, including the third by a single digit. Moreover, it served as the seventh straight contest that injury-riddled UTEP has dressed just seven players.

Gill finished with 14 points and seven rebounds in 30 minutes, by far her best game since returning to the court from an injury. Jordan Alexander matched Gill with 14 points for her second straight double-digit scoring effort while Katarina Zec extended her double-figure scoring streak to seven by tallying 11 points.

USM was led by 11 points each by Respect Leaphart, Hailes and Amber Landing while Mayze finished with nine.

Southern Miss gave the Miners fits early on, jumping out to a 14-7 lead (5:40 1Q) midway through the stanza. UTEP started to settle down at both ends of the court, resulting in a 9-0 push that was capped by a Zec triple to give UTEP its first lead of the contests (16-14, 1:24 1Q). A jumper by the visitors halted the stretch but UTEP carried an 18-16 advantage through 10 minutes of action.

After USM forced the second tie of the tilt, the Miners started to rain triples by hitting three on three consecutive possessions to fuel a 9-0 surge in the blink of an eye. The result was a 27-18 advantage for the home side with 6:34 to play in the half, forcing a Lady Eagle timeout. It was back-and-forth the remainder of the quarter, with the Miners leading by seven (30-23) going into the locker room.

UTEP was a bit sluggish to start the third quarter, with USM capitalizing in the form of an 11-0 run over the first two-and-a-half minutes to surge into the lead (34-30). The Miners countered with five straight points to pull back only to have the Lady Eagles answer with six straight to spring back ahead. UTEP did well to not let it get out of hand, and it trailed by two (44-42) heading to the final frame.

UTEP continued to battle as the game moved into the final frame, eventually using a 6-0 surge to turn a 51-47 deficit into a 53-51 advantage with 3:21 to play. The Miners continued to lead by three (62-59) with 19 seconds left after two clutch free throws from Neidy Ocuane. USM’s Kelsey Jones got a bucket inside to cut it two and then fouled Gill with eight seconds left. She hit the first but misfired on the second and Landing rebounding. Without any timeouts USM’s Landing kicked it ahead to Hailes, who eventually found Mayze for the game-winning trey.

UTEP will have a bye on Thursday before wrapping up its three-game homestand against UTSA (1 p.m., Feb. 23). Admission is free for the celebration with “National Girls and Women in Sports Day” against the Roadrunners.