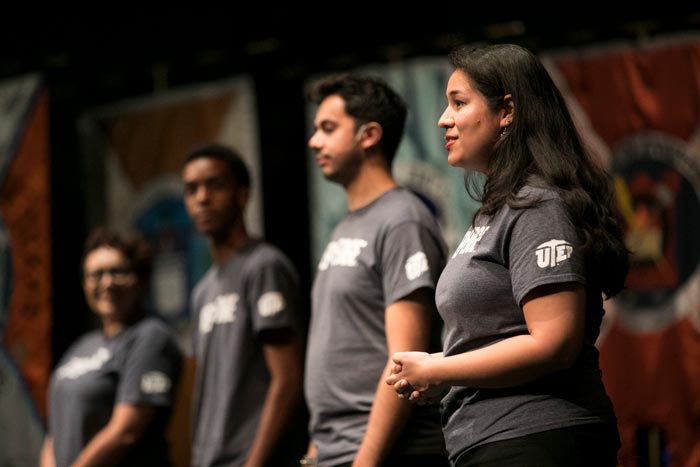 A trio of students and a recent UTEP alumna promoted their passion for the UTEP Edge, a new student-centered philosophy that is being embraced throughout campus, at the annual Fall Convocation at The University of Texas at El Paso’s Magoffin Auditorium.

The team told the crowd of students, faculty and staff about their academic journeys that included some moments of uncertainty. However, through their unique narratives, the presenters shared a common thread of finding strength and confidence in who they were, and enhancing themselves through high-impact experiences offered at and through UTEP.

The foursome took turns speaking about the positive attributes they brought with them as freshmen, such as being bilingual or having strong communication skills. They were able to build on those skills through internships, student employment, study abroad and capstone project opportunities. These activities boosted their self-confidence, and honed their leadership and critical thinking skills.

One of the four, Jonathan Picado, said his study abroad experience in Cuba made him more globally aware. He came to UTEP with polished communication skills due to his years as a high school debater. He said he hopes the UTEP Edge philosophy encourages students to celebrate their talents and potential.

“You have skills and assets,” he said. “Some students think they come to UTEP as a blank slate and they’re wrong. Maybe you’re bilingual, or you worked part-time in high school so you mastered time management. You build on that.”

Noelle Molinar, a lecturer in the Department of Languages and Linguistics, also was part of the presentation. She earned her bachelor’s and master’s from UTEP in 2012 and 2016, respectively. On stage at Convocation, she offered her perspective as a former student, but off stage she looks for ways to help students who bring their own interesting back stories to her class.

“Each will succeed in their own way,” said Molinar, who was a Kennedy Center American College Theater Festival National Stage Management Fellow in 2012.

Charlie Gibbens, Ed.D., interim assistant vice president for student support, said the University has promoted many of the UTEP Edge’s high-impact experiences for years, but now more attention is being drawn to such activities as student employment, community engagement, and research and scholarly activity.

“This will help us to make students more aware of their opportunities,” he said after the presentation. “The goal of the Edge is to help students connect the dots to better prepare them for life after UTEP.”

The foursome and their message earned a standing ovation from the audience, which included University President Diana Natalicio and the stage party of UTEP’s academic, student and alumni leaders. She lauded the large and dedicated team of campus faculty and staff who developed the UTEP Edge during the past year.

In prepared remarks, President Natalicio covered many of the University’s recent accomplishments, such as the record student enrollment of 25,078 for fall 2017, the recent 25th anniversary of the successful El Paso Collaborative for Academic Excellence, the opening of the School of Pharmacy, the ongoing construction of the $85 million Interdisciplinary Research Building, and the introduction of MinerLink, a robust online communication data network for alumni.

Free and user-friendly, this platform is part of a collaborative effort between the University’s alumni relations and asset management and development offices to stay connected with the growing UTEP alumni population around the world. The goal is to build closer ties with graduates and allow them to have closer ties with each other.

The interactive website will allow alumni to share their name, class, employer, city, state or major. It will alert alumni to the University’s different initiatives in case they want to volunteer, mentor or participate in a professional development opportunity.

“We are excited about MinerLink,” said Sandra Aguirre-Covarrubias, Ed.D., director of communications and alumni partnerships at the Office of Alumni Relations. “Our goal is to engage our graduates with a variety of UTEP initiatives. We look forward to having our alumni share their knowledge, experience and networks with current UTEP students.”

President Natalicio also shared a few ideas to pursue in coming years. One initiative was to expand efforts with municipal and private economic development experts to recruit business and STEM (science, technology, engineering and mathematics) industries to move to or create satellite offices in the El Paso region to give highly qualified and in-demand UTEP graduates an option to stay in the community.

She said there are many UTEP graduates who would be happy to work for certain companies if they were local, paid a competitive wage and gave the opportunity for professional advancement. She admitted that there are opportunities for civil engineering graduates because of building and road construction, but alumni in other high-demand engineering, computer and biomedical fields are out of luck for the most part.

“When you are exporting 75 percent of your engineers to other places after investing a lot in educating them, I think it is a loss for the community,” President Natalicio said during the reception.

The idea will benefit the region in high-tech industries, but also in health, business and other fields as more companies become interdisciplinary, said Peter Golding, Ph.D., professor of engineering education.

“We are our community,” Golding said of UTEP. “The future of our region depends on our partnerships. From pre-K on, there is a continuous pathway of learning. Education drives one’s quality of life in this community. It’s a wonderful thing.