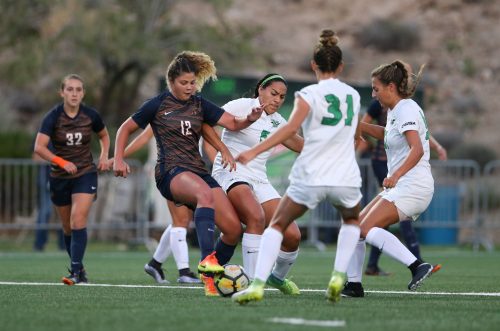 Lauren Crenshaw tallied her team-leading fifth goal of the year but UAB received goals from Jamiera Lunsford (21’) and Caroline Kehrer (77’) as the Blazers edged out the Miners, 2-1, at University Field on Thursday night.

“Conference games are decided on one or two plays and we didn’t complete our chances today,” UTEP head coach Kevin Cross said. “We made some mistakes and gave up a few chances that we need to clean up. We need to be more focused and have every player dialed in for Sunday’s game.”

UTEP (6-5-1, 1-2) trailed early in the first half. UAB (5-4-1, 1-1) worked the ball up the field where Lunsford shot the ball and it slipped right under senior GK Alyssa Palacios. The Blazers also earned a total of 12 corner kicks, with seven coming in the opening half.

Crenshaw put the Miners on the board in the 37th minute. In a flurry of activity off a free kick, Jodie Enokson took a shot at the goal that was blocked by a defender. Crenshaw was right behind her to put it away.

Palacios registered four saves for the Miners. She now sits at 396 total saves in her career. The Texas native trails Amanda Smith (1996-99) by 42 stops for the program standard.

The Miner defense started off the second half strong. On a UAB breakaway run, Carleigh Simmons sped down the flank to catch up to the forward. She managed to completely stop the attack and get the ball out.

On an almost glorious moment with 20 minutes left in the game, Crenshaw carried the ball up the field, where she connected with Pate for a one-two pass. Crenshaw sped past the defender and dragged the goalkeeper off her line and took her one-on-one. With an open net, Crenshaw took the shot but was denied by the left post.

Both teams battled through a physical match with a yellow card issued to UTEP’s Crenshaw (9’) and UAB’s Lunsford (69’). The Blazers got their second goal of the match from a corner kick. The ball sailed into the box where Kehrer drove the ball into the net with a header.

The Orange and Blue will return to the pitch on Sunday night at 6 p.m. at University Field to face Middle Tennessee in a crucial Conference USA matchup. Tickets are $5 for adults and $3 for kids and may be purchased by calling 915-747-523.