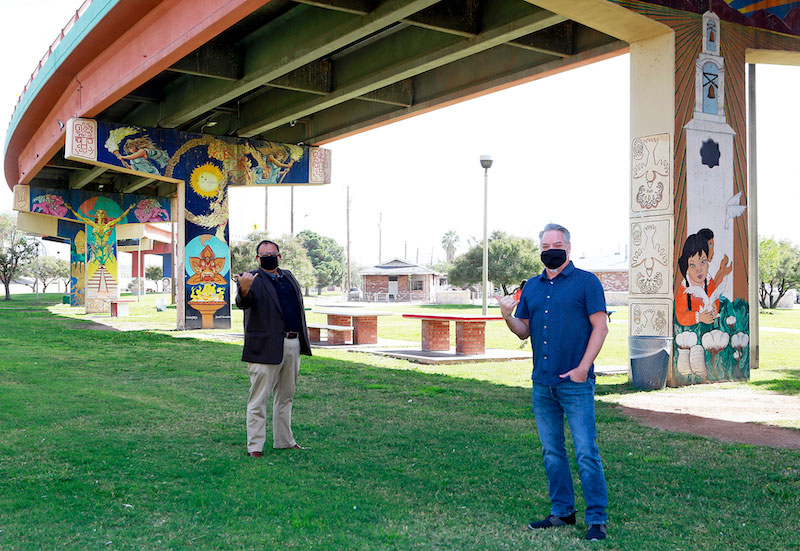 The University of Texas at El Paso’s Jose Maria Herrera, Ph.D., assistant professor of instruction in the Department of Teacher Education, left, and Brad Cartwright, Ph.D., associate professor of instruction in the Department of History, stress the importance of Mexican-American studies to their students who often go on to teach history and social sciences. Research has shown that middle and high school students who are exposed to ethnic studies do better in school. Photo: Laura Trejo / UTEP Communications

Recent discussions about schools and statues in the Paso del Norte region named after Confederate soldiers and a 16th-century Spanish explorer raised the issue of how much Latino history is understood and The University of Texas at El Paso’s role in how it is taught.

The Texas Board of Education approved in 2018 the creation of curriculum standards for a Mexican-American Studies (MAS) elective course called “Ethnic Studies: An Overview of Americans of Mexican Descent.” It launched in time for the 2019-20 academic year.

UTEP graduates comprise many of the history and social studies teachers who work in the region’s school districts, and University professors said they try to include as much information about Mexican-American history as possible into their curricula. That background will assist middle and high school educators who often do not have MAS programs and must embed their own knowledge into established courses.

Recent studies by Stanford University and the University of Arizona have shown that middle and high school students who are exposed to their cultural history are more academically engaged, earn higher grades and standardized test scores, and have better high school graduation rates.

Mexican-American and Latino students comprised 51.3% of school-aged children in Texas in 2018, according to the MAS TX Education website, and this demographic is expected to grow to 67% by 2050.

Tommy McCoy, who earned his bachelor’s degree in history with a minor in education from UTEP in 2017, teaches eighth-grade history at Clara Driscoll Middle School in San Antonio, Texas. The El Paso native is passionate about the need to weave in Mexican-American history in his courses.

“Now more than ever, we need to teach kids different narratives of history,” said McCoy, who augments his course with primary source material to provide a more accurate assessment of the past than what often is found in textbooks. “Teaching diversity is crucial for our future. It’s not something we should be afraid of. Diversity should be embraced. Our nation was built off of diversity and the hard work of immigrants, slaves, Native Americans and many other groups from all parts of the world.”

McCoy praised his UTEP professors, especially José Maria Herrera, Ph.D., assistant professor of instruction in the Department of Teacher Education, for introducing him to Mexican-American history that went far beyond what was in the textbooks.

Herrera said that he and his colleagues try to raise the awareness of Hispanic history among their students because they cannot integrate new information into the conventional courses if they do not know it.

One example he gave was the 1954 Hernandez v. Texas case where a Mexican-American was convicted of murder by an all-white jury. The defendant appealed the verdict to the U.S. Supreme Court. It ruled that Hernandez was a victim of discrimination under the 14th amendment. Herrera said the decision broadened the country’s civil rights laws beyond Blacks to include Latinos and other minorities.

Herrera, an El Paso native who earned his master’s degree in history from UTEP in 1998, was among those who asked Fort Bliss officials to change the name of one of its main thoroughfares because it honored Confederate Gen. Nathan Bedford Forrest, who also was a one-time leader of the Ku Klux Klan. The Army post switched the name to Cassidy Road in 2000 to recognize former post commander, Lt. Gen. Richard T. Cassidy.

The professor also supported the creation of “The Equestrian” statue that was placed in front of the El Paso International Airport in 2006. City officials initially planned for the bronze sculpture to honor Don Juan de Oñate, a Mexican-born explorer who discovered the pass to the north, and claimed the area for Spain. He also is remembered as a cruel administrator who enslaved the indigenous people in what is now New Mexico and maimed many of the males. The statue was renamed to appease critics.

“Memorials are tricky issues,” Herrera said. “(Oñate) was rightfully reviled in New Mexico for his cruelty. When you try to understand history through multiple lenses, it can get very complicated.”

Brad Cartwright, Ph.D., associate professor of instruction in the Department of History and director of UTEP’s Center for History Teaching and Learning, said that his students bring a wide spectrum of Mexican-American history knowledge to his courses. He lamented that middle school and high school curriculum often leaves out or minimizes the importance of marginalized groups.

For Texas history, which is taught in seventh grade, students learn about the Alamo and the Texas Revolution, but the way it is taught casts Mexicans as villains and Texans as martyred heroes, Cartwright said. He added most students know less about the Mexican-American War of 1846 to 1848, a conflict started because of the U.S. annexation of the Republic of Texas and a dispute of the republic’s southern boundary.

“This war of American aggression traditionally receives very little coverage in American history textbooks, which downplay or ignore events that place the U.S. in a negative light,” Cartwright said.

He said more of his students are familiar with 20th century Mexican-American history such as the repatriation of Mexicans during the Great Depression and the Bracero program, where the U.S. allowed approximately 4.6 million Mexican workers to enter the country legally for more than 20 years because of the U.S. entry into World War II.

He said he encourages his students to create opportunities to teach Mexican-American history in their classes and to show their future students how to use other texts and primary sources to challenge their textbooks, which may have errors, distortions and omissions in their narratives.

“I believe this is essential because if students don’t see themselves, their families, their communities or their ethnicities in the past, they are less likely to use history as a tool for understanding the present and for charting a better future,” Cartwright said.

One of his former students, Jennifer Urban-Flores, a social studies teacher at Harmony Science Academy – El Paso, said that more secondary educators in El Paso need to teach MAS, especially in high school. She said that there seem to be more educators comfortable with MAS in Austin, Houston, San Antonio and communities in south Texas.

Urban-Flores, an El Paso native, said MAS allows the young students – many from immigrant families who will be the first to attend college – to learn about themselves and the legitimate contributions and influences of their culture on social movements in their communities and beyond throughout U.S. history.

“When I was in college, I took similar courses and was blown away by how much of my history I did not know,” said Urban-Flores, who earned bachelor’s and master’s degrees in history from UTEP in 2014 and 2016, respectively. “Being able to teach Mexican-American Studies to my students felt like a way to close the knowledge gap for the next generation of students and scholars.”