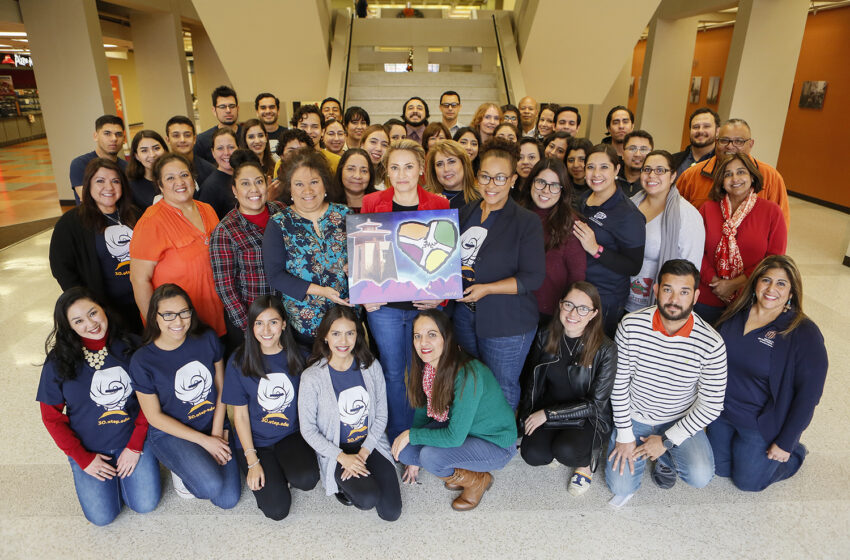 After an immense amount of outreach that took the form of emails, a volleyball tournament and trying to boot a soccer ball past a University dean manning a goal, faculty and staff at The University of Texas at El Paso raised more than $100,000 to benefit charitable organizations throughout the state, nation and world.

The State Employee Charitable Campaign is the only authorized workplace campaign for state agency and higher education employees throughout Texas. This year marked the campaign’s 25th anniversary and was also a goal-breaking year for UTEP.

Stephanie Walton, SECC committee chair, said the group hoped to raise $90,000. In all, $101,668.62 was raised behind participation levels the campaign hadn’t seen in a decade.

“When it comes to giving, there’s passion, some excitement and some happiness that comes with that,” Walton said. “To say that I’ve done it, not individually but collectively with my colleagues, it says a lot about who we are and what we believe in.”

Greg Bennett, the state campaign manager for the SECC, said UTEP’s contributions play a critical role in the overall campaign because institutions of higher education make up a large portion of donations.

Walton said the committee tried different approaches to encourage participation this year. They wanted to find out what employees were passionate about and whether or not they had a personal connection to one of the charities.

“There’s a human factor when it comes to giving back to our community, and I think that’s one of the things we’ve done very well because we all can relate to that,” Walton said. “We shared with our colleagues that this is the one opportunity that we can stand together as a UTEP family and give back to our community or a local charity or state charity of our choice that really touches on those things that are real to us.”

Shafik Dharamsi, Ph.D., dean of UTEP’s College of Health Sciences, is the UTEP SECC committee’s vice chair. He said he had his share of ideas for how to increase participation. But the first thing Dharamsi wanted to do was visit with the charity organizations to learn more about the work they are doing.

Dharamsi said he visited as many organizations as he could and spent hours touring the facilities and listening to the stories of the people who worked there. He described his trips as a powerful experience.

“You can’t help but be moved going to a place that responds to people living with homelessness and organizations that respond to people with disabilities or victims of domestic violence,” Dharamsi said. “You really get a powerful sense of how you as a citizen, an individual, can contribute to the overall well-being of society.”

After listening to their stories, Dharamsi said he felt that every faculty and staff member needed an opportunity to hear from these organizations, too.

Utilizing Dharamsi’s passion to help others and his love of soccer, he set up the Deans’ Challenge, which allowed UTEP faculty and staff to line up and kick a penalty shot to try and score a goal against a University dean.

This friendly competition, which took place on the Geology Lawn near Centennial Plaza, was more than an opportunity for faculty to meet their dean. Dharamsi said the real intent was to invite the charity organizations and have them set up information booths.

“The faculty can come to do something fun, but more importantly, they had a chance to visit with the different organizations every week and hear their stories firsthand,” Dharamsi said.

In addition, Dharamsi reached out to other deans and asked to speak to their respective college’s faculty during their regular meetings.

“That was the other piece, trying to connect with each faculty member and to inspire them to come look at what this campaign effort really meant – notwithstanding of the impact of the different ambassadors of each college,” Dharamsi said.

Dharamsi is referring to dozens of employees who represented each department as campaign coordinators. Each coordinator’s goal was to encourage their peers to participate and to serve as a guide for the campaign.

Denisse Olivas, director of the Center for Hispanic Entrepreneurship, was one of the SECC coordinators for the College of Business Administration. She said she wanted to create a bigger impact for the campaign, so she and the other SECC coordinators in COBA put their heads together and came up with a plan.

With Walton’s help, Olivas and her team invited Paydirt Pete to their college and knocked on the doors of every office in the building.

“The employees were surprised and really enjoyed their interaction with Pete,” Olivas said. “We asked them what they were thankful for and recorded a video. It was a great way to connect with our peers, bring a little joy and remind them to take action.”

After their visit with Paydirt Pete, Walton said her colleagues’ interest grew in the campaign, which resulted in the college doubling its donations from last year.

Once the campaign concludes, the SECC committee comes together and looks back at the coordinators’ efforts to drum up excitement. Each year, the department with the greatest campaign spirit is awarded the Traveling SECC Spirit Award Painting. This year, the award was presented to Extended University.

Radamés M. Gómez, the SECC coordinator for Extended University, described his team as a family that tries to help as much as it can.

Professional and Public Programs, a unit of Extended University, hosted an SECC coordinator-led volleyball tournament called “Spike It Up for Our Community.” The tournament gathered more than 60 employees from seven departments. As the employees took part in a friendly competition, representatives from local charities were on-site to give more information on where employees’ campaign contributions would go. The Environmental Health and Safety department’s team, the Safety Pros, walked away with the champion trophy.

This year’s volleyball tournament and the deans’ soccer challenge has Dharamsi looking at possible activities for next year. Some early feedback he received from faculty is to throw a pie in their dean’s face or put them in a dunking booth.

Dharamsi chuckled at the ideas and said that personal connection with faculty gives a collective sense of collaboration for the impact they could have on the community.