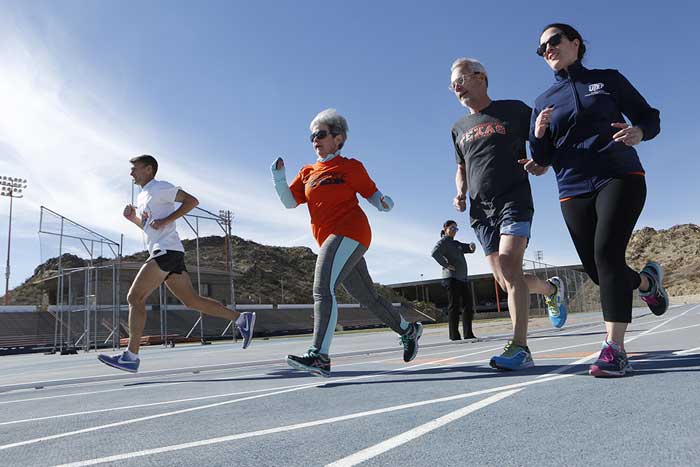 Longtime UTEP staff member Terry Weber was 57 years old when she trained for her first 5K run with support from fellow Miners in The University of Texas at El Paso’s Couch Potato to 5K training program.

Started in 2012, the training program was designed by UTEP’s Wellness Program to motivate employees to get off the couch and start exercising. It joined new runners like Weber with experienced runners from UTEP called peer leaders, who offered advice on how to get started, avoid injuries and stay on track.

Weber trained with peer leader Courtney H. Rios, a senior internal auditor II at the University, to get in shape for UTEP’s Commitment to Fitness 5K Run in 2012. In 10 weeks, Weber went from walking around the concourse at the Don Haskins Center to finishing the race first in her age group.

“If I can do it, anybody can do it,” said Weber, administrative services coordinator in the Department of Rehabilitation Sciences. “I’m 63 and I started running when I was 57. I think that’s an inspiration right there. Courtney was my coach and she and I are still running three days a week.”

Starting February 19, Weber and Rios will team up with the Wellness Program to lead an early morning Couch Potato to 5K running group on campus for UTEP employees.

“This is a good starting point for UTEP employees who want to run, and hopefully it will help them make a habit of physical activity,” Lerma said. “We also want to give faculty and staff an opportunity to come together and support each other by being able to run as a group.”

The Wellness Program also will offer 5K to 10K and Half Marathon running groups for advanced runners eager to train for a 10K run or half marathon.

Lusk has run 18 marathons including the Boston Marathon, Berlin Marathon and the California International Marathon. He said anyone can run, regardless of their age, ability, weight and gender.

“It’s the quickest way to improve fitness and to manage weight,” he said. “It’s also cheap. It just requires a good pair of running shoes, shorts and a couple of T-shirts. You start slowly and gradually build up, walking or jogging at first, and in time, you suddenly find that it has become easy and, more importantly … fun.”

Beginners will follow a 12-week plan that combines short intervals of walking and running to prepare them to run a 5K, or 3.1 miles.

Starting off slow and steady helped Weber – a UTEP employee for more than 20 years – put her best foot forward. For 20 minutes during lunch, she alternated between walking for two minutes and running for two minutes at the Don Haskins Center. With Rios’ help, she gradually increased her running time. After a few weeks, Weber and Rios were running three minutes and walking one minute around Sun Bowl Stadium. Soon Weber was running from University Avenue to Magoffin Auditorium, past Old Main and over Cardiac Hill to the Don Haskins Center at lunch.

Like Weber, Rios joined a UTEP fitness program when she started running in 2009. The support she got from her UTEP coaches helped her run her first mile at the age of 52. Since then she has completed three marathons and several half marathons.

“I love to coach new runners because many people believe they have to be very athletic to be able to run distances, but that is not true,” Rios said. “It only takes commitment and discipline, and the rewards are well worth it! The friendships you make along the way last a lifetime.”

The 5K to 10K and Half Marathon running groups will be designed to help experienced runners who’ve run a 5K get to the next level, whether it’s a 10K or half marathon.

Workouts will focus on enhancing runners’ endurance while improving their performance through speedwork.

Ofelia Dominguez started running seven years ago because she was tired of not being physically active. Since then, she has participated in five half marathons, five triathlons, and four 10Ks.

“I think when you run in a group, you’re held accountable, so it’s not as easy to say, ‘I’m not going to run today,” she said.

Participants will meet at 5:15 p.m. on Monday, February 19, at the Sun Bowl Stadium’s south entrance and split into beginner and advanced groups.

Lerma said after Feb. 19 each group will meet on a designated day and time each week until May 7. All groups will run on the UTEP campus. Participants should register at utep.edu/run-fitness/ by Feb. 19.