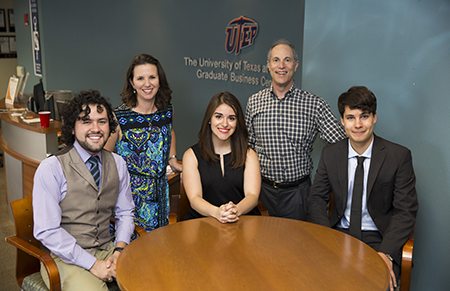 Three students with different, but similar dreams, decided two years ago to take a new academic road offered though The University of Texas at El Paso. This summer they completed their journey.

Zach Jackson, Jorge Martinez and Daniela Noriega were high-performing engineering undergraduates when they heard about a new B.S./MBA program that would allow students in good academic standing with enough credit hours to simultaneously take dual credit courses that would put them on the fast track toward their Master of Business Administration degree.

The bottom line was tantalizing: save time, save money and be a more desirable job candidate. The trio was the first to take the challenge, completing their coursework in July 2016.

They gathered recently at UTEP’s Graduate Business Center, 201. E. Main Street, in downtown El Paso to discuss their experiences with the B.S./MBA program, which is in the process of expanding, and their future plans.

“To be honest, I got more (out of it) than I expected,” said Noriega, an El Paso native raised in Juárez, Mexico.

The daughter of maquiladora operators grew up wanting to be an entrepreneur, so she was intrigued with the concept of starting her MBA as she continued her undergraduate work in industrial engineering. She earned her bachelor’s degree in 2015.

“I saw it as a growth opportunity,” she said.

Noriega said she initially found the business courses a little odd when compared to engineering, but she quickly embraced learning about finance, marketing, accounting, economics, management and the like.

“As engineers, we’re used to solving problems, not writing essays,” said Noriega, who begins work as an industrial engineer with Lockheed Martin in Palmdale, California, in September 2016.

The program, which combines certain undergraduate engineering specialties with an MBA, was seen as a natural extension at the University where business and engineering students often collaborate for venture competitions. Approximately 25 percent of MBA students have engineering degrees.

The program was supposed to save students money and time (about 18 months/18 semester credit hours by using dual credit), and make them more marketable. It started as a collaboration between the College of Business Administration and the College of Engineering’s departments of Computer Science, Electrical Engineering, and Industrial, Manufacturing and Systems Engineering. They have since added the departments of Metallurgical and Materials Engineering and Engineering Leadership.

Participants need at least 90 college credit hours and a 3.3 GPA to be accepted. In some cases the GMAT requirement is waived if the student has a 3.75 or higher GPA and has demonstrated an ability to handle quantitative coursework. The program currently has six students, but more are expected as the program expands.

The joining of the students has created a richer, more comprehensive discourse in the classroom, said Laura Uribarri, assistant dean for academic programs in UTEP’s College of Business Administration, including MBA programs.

“There’s significant synergy there,” she said.

Uribarri added that employers in the petroleum, pharmaceutical and biomedical fields have told her that that they like to hire people with the B.S./MBA combo because those graduates offer a different perspective to problem solving.

“It is a skill set that is becoming increasingly valuable,” she said. “That’s what we hear from our partners and that drives our interest. We see great value in diversity.”

That is among the reasons that the program expanded this summer to include nine degree plans from the College of Science. Preliminary outreach was done among biology majors during the spring 2016 semester. The plan was accepted by the Provost’s Office during the summer.

Among the new degree plans joining the B.S./MBA program are physics, geology, microbiology, biology with a concentration in ecology and evolution or biomedicine, math, math with statistics, math with actuarial sciences, and math with applied sciences.

Uribarri credited Nancy Marcus, Ph.D, associate dean for the College of Science, for leading the collaborative effort. Marcus, a professor of mathematical sciences, is part of the Graduate Council and has helped start similar fast-track programs at UTEP. Marcus said the new B.S./MBA degree plans were selected because they had credit-hour flexibility that allowed for minor options or electives.

She said the college review board unanimously approved the concept because it already noted its success in the University’s other fast-track programs that pave the way for more UTEP students to earn graduate degrees.

“The University is a change agent,” said Marcus, who said the College of Science has many potential B.S./MBA candidates. “The trend at UTEP and across the country is to merge disciplines.”

Martinez, another of the other B.S./MBA trio, said he was not sure what to expect in his MBA courses, but quickly learned that business has more X-factors.

“You’re constantly adjusting,” said Martinez, a native of Mexico City who grew up in Juárez. “There is no real fool-proof method to follow. It’s not something (engineering students) are exposed to.”

Martinez, who earned his bachelor’s degree in electrical engineering in 2015, started his doctoral studies in marketing in August 2016 at the University of Arizona in Tucson. He plans to do research in modeling and strategy and eventually join the professoriate.

For those who want to follow the B.S./MBA path, the trio suggested you enter with an inquisitive mind. They suggest prospective students attend UTEP’s annual MBA Week, Sept. 23-29, 2016, at the Graduate Business Center. Jackson, who also earned his MBA this summer, said the program whetted his entrepreneurial spirit. He said what he learned went far beyond what he expected and he looks forward to using that knowledge.

“Be curious and ask questions,” Martinez said. “In engineering we’re used to facts. We’re not used to talking to people. This experience will help you establish relationships that you will need to survive (MBA courses), and then keep afterward.”