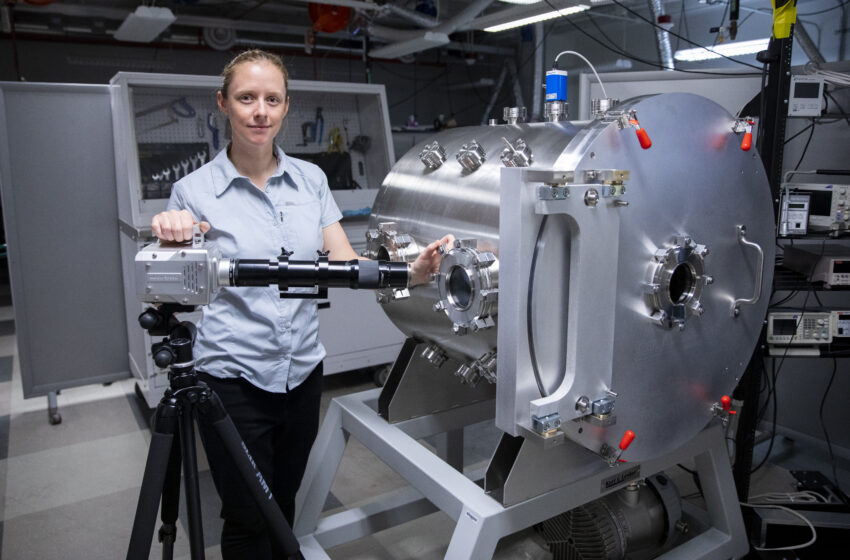 Newly minted NASA Innovative Advanced Concepts (NIAC) fellow, Amelia Greig, Ph.D., assistant professor of mechanical engineering at The University of Texas at El Paso, will have the opportunity to expand her research to harvest water on the moon through the receipt of a highly competitive NIAC award.

Greig’s proposal was one of only 15 potentially revolutionary concepts selected for funding out of hundreds of applicants.

Greig’s research is among several projects under UTEP’s Center for Space Exploration and Technology Research (cSETR) focused on revolutionizing lunar exploration. The renowned UTEP research center recently formed an alliance with the Johnson Space Center, NASA’s center for human spaceflight, to do work focused on water harvesting for lunar In-situ Resource Utilization (ISRU) — the use of natural resources of the moon.

“A couple of years ago, it was confirmed that there is definitely water on the lunar surface in certain places frozen very deep inside the regolith,” Greig said. “Many researchers are trying to figure out how we can get it out in sufficient quantities to be able to support life on the surface. A lot of places are looking at thermal extractions – basically heating up the regolith so the water would just evaporate off and you could collect it.”

Greig’s innovative research addresses some limitations of thermal processes by creating high voltage arcs across the surface of the regolith that will cause it to shatter into thousands of molecular particles in electrically charged form. Then, using electric and magnetic fields, the particles can be easily moved and sorted by type to simultaneously collect a substantial amount of water and other natural resources.

The NIAC program invests in early-stage technology ideas from NASA, industry and academic researchers worldwide. Greig received a phase one award, which provides funds to enable her to test the feasibility of her proposed concept within a nine-month period.

During phase one testing, Greig and a team of UTEP graduate and undergraduate student researchers will develop her idea by running experiments using lunar regolith simulant, or rocks similar to those found on the actual surface of the moon. Greig is optimistic that if the results are promising, she can vie for a phase two award, which is where a prototype of the system can be created that could eventually be deployed on the moon.

Phase one awards are competitively selected by NIAC based on an independent peer review with technical concurrence by NASA. Winners of the initial phase will have the opportunity to compete for phase two and three awards to further support and advance their concepts through additional funding.

“The NIAC funding is a testament of the excellence of UTEP space exploration research and education program,” said Ahsan Choudhuri Ph.D., associate vice president for Aerospace Center and founding director of cSETR. “We have world-class aerospace talents like Amelia who are significantly contributing to the progress of the U.S. human space exploration mission while preparing a 21st century U.S. aerospace workforce.”

For more information on the 2021 NIAC phase one awards, click here.