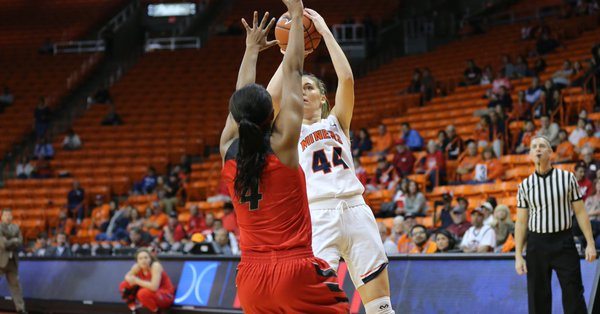 NEW ORLEANS, La.- The UTEP women’s basketball team was knocked off by host Tulane, 67-56, in the championship contest of the 22nd-annual Tulane Classic inside historic Fogelman Arena Friday afternoon.

The Miners (7-4) trailed by just three (21-18) after the first quarter but the Green Wave (8-5) opened up the second frame on an 11-0 run to grab control of the contest. UTEP continued to battle as the game wore on but could never get closer than nine points the rest of the way.

Katarina Zec tallied 10 points to pace the Orange and Blue, who finished at 36.2 percent (21-58) from the floor. UTEP won the rebounding battle (43-38) for the 11th time in as many contests but it wasn’t enough to offset the 40 percent (27-68) shooting by the Green Wave. Tulane was paced by 22 points by Kolby Morgan, but needed 23 field goal attempts to do so.

“It was an honor to be in the finals against Tulane,” UTEP head coach Kevin Baker said. “They have a great team and they such a great job here. I thought we played really, really well in spots here today and I was so proud of them. But then also there were some points in the game where we didn’t play well at all. In the game of basketball you just cannot do that and expect to win, especially on someone else’s floor.”

UTEP jumped out to an 8-4 lead three minutes into the contest, aided by back-to-back triples from Zec and Jordan Jenkins. The Green Wave halted the 6-0 run with an old-fashioned 3-point play before the two sides traded baskets over the next couple of minutes. Tulane then scored on three consecutive possessions to surge ahead by eight (21-13) with 2:14 to play in the opening quarter. UTEP tightened things up defensively in the final two minutes to hold the Green Wave scoreless. At the other end of the court the Miners used a lay-up by Jenkins and a 3-point shot to beat the buzzer from Patterson to trim the deficit to three (21-18) at the quarter break.

Tulane quickly regained momentum in the second quarter, opening the frame by ripping off 11 straight points during a four-and-a-half minute span to put UTEP down by 14 (32-18). Jenkins was fouled on the way to the hoop and calmly sank both charity stripe tosses to end the surge. After Tulane extended its advantage to 16 (36-20), Faith Cook drained a triple from the wing to bring the Miners within 13. The Green Wave reinstated a 16-point cushion (39-23) at the break thanks to a trey by Sierra Cheatham.

The two sides traded baskets over the first several minutes of the third quarter before UTEP went on a 7-2 run to whittle the deficit to 12 (50-38). Zec did most of the damage, including a driving lay-up that was followed by a triple to fuel a mini personal 5-0 push. The effort helped the Miners outscore the Green Wave, 15-11, in the frame to make it a 12-point contest (50-38) heading to the fourth quarter.

UTEP started the final frame strong, scoring five of the first seven points of the period to get within single digits (52-43) for the initial occasion since early in the second quarter. The two teams went back-and-forth over the next couple of minutes before the Green Wave ripped off five straight points to reinstate a 14-point cushion (59-45) with 4:59 remaining in regulation. UTEP continued to play hard down the stretch, peeling off nine straight points late in the game to once again get within nine (65-56) with 49 seconds to play.

The Miners will now be off for the holiday break before returning to action at Cal State Fullerton at 7 p.m. PST/8 p.m. MST on Dec. 29. UTEP will then wrap up non-conference play the ensuing day at UC Riverside at 5 p.m. PST/6 p.m. MST.

Both contests will be broadcast locally in El Paso with Steve Kaplowitz on the call.