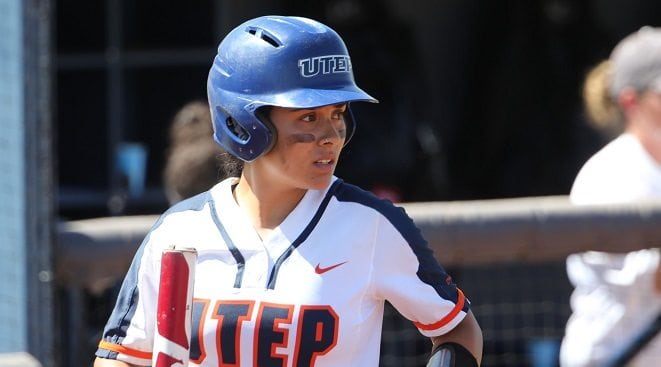 Courtney Clayton registered a hit in each game, the first was a single in game one during the sixth inning that broke up a no-hitter, while her second knock came during the third inning in game two. Clayton now has 241 career hits. Clayton is also set to start her 205th consecutive game on Sunday against Middle Tennessee.

The Miners took a 2-0 lead during game two in the second inning. Kacey Duffield drew a walk to lead off the second frame. Pamala Baber followed with a single on a high pop fly that fell between two MT defenders and rolled into the dugout that was ruled a dead ball.

With that, the runners advanced to second and third. Ariana Valles put UTEP ahead 1-0 on a groundout that plated Duffield. Cortney Smith put her squad up 2-0 on a sacrifice fly hit to center that scored Baber, who had advanced to third on Valles’s groundout.

But the Blue Raiders would score seven unanswered runs, putting up three in the fourth, and two each during the fifth and sixth innings. Lexi Cushing hit a two-run home run in the fifth that gave MT a 5-2 lead.

As of Saturday night, LA Tech (15-6), who has its bye weekend in conference action, is standing in first place overall in C-USA, while FIU with its sweep leads C-USA East Division. FAU is in second place in the East, while UAB is second place in the West.