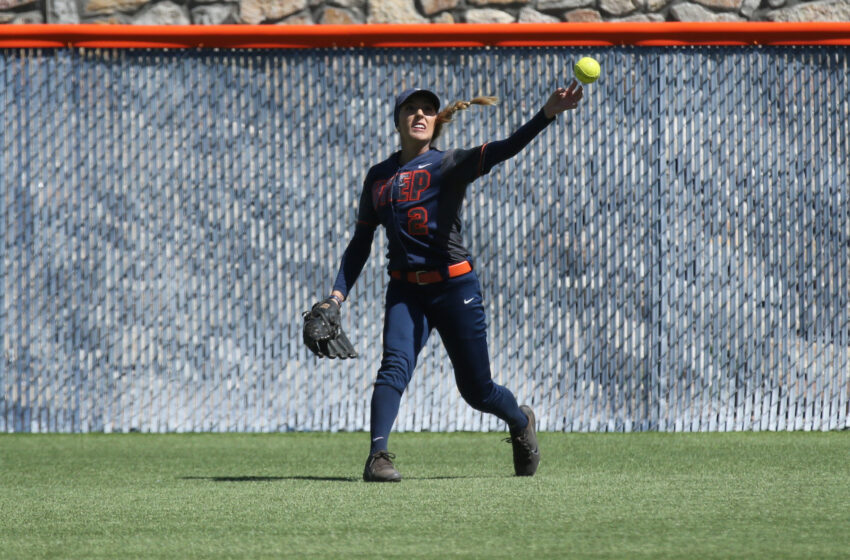 LAS CRUCES, N.M. – The UTEP softball program battled NM State after trailing by seven runs early and rallied to get within two runs, but fell 8-6 in game one.

The Miners will resume Conference USA action March 30-31 as UTSA will head to the Sun City for an Easter Weekend series. Friday’s doubleheader will start at 2 p.m., while Saturday’s series finale is set for a noon start.

Courtney Clayton hit her 24th career home run in game two, a three-run shot. The senior now ranks fifth on the program’s all-time list, while she moved to no. 7 on the RBI list with 104 in her career. Clayton also registered a double in game two, giving her 47 during her successful career and one behind no. 2-ranked Chelsea Troupe.

UTEP 6 – NM State 8
Ariel Blair put her squad up early 1-0 when she scored on a passed ball during the first inning. But the Aggies answered with a run in the bottom half, six runs during the second inning and another one in the fourth, making the score 8-1.

The Miners and Clayton, however, kept fighting. Clayton lifted a three-run dinger, her team-leading sixth of the season, over left center, scoring Taylor Sargent and Blair during the fifth frame to get the Orange and Blue within four runs (8-4). Sargent led off the fifth with a single to left, while Blair drew a walk.

Ariana Valles then brought her hometown team within two runs (8-6) after she connected on a two-run double, plating Mariah Ellis and Sargent. Ellis had reached on a fielder’s choice and Sargent reached on an error. Valles’s hit came with two outs in the inning. Clayton then drew a walk following Valles’s double to put the go-ahead run in the batter’s box, but NM State’s pitchers kept the offense in check, while retiring the side in order in the seventh to claim the victory.

UTEP turned its 15th double play of the season during the third inning. Valles finished the contest 2-for-4 with a pair of RBI (tied season high) and four assists, while Sargent crossed the dish twice.

Kira McKechnie made the start in the circle, while also hitting in the sixth spot in the lineup. She was switched to the designated player when Allie Johnson made a relief appearance.

Starting pitcher Julia Wright threw 2.1 innings and struck out five Aggies and McKechnie tallied a pair of K’s. McKechnie made her way into the starting lineup again, hitting sixth at the designated positon in game two.

McKechnie drew a walk in the second inning after being down in the count 0-2 and reached on an error during the fourth.