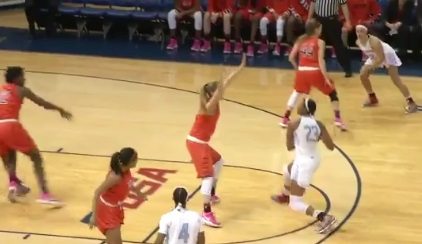 The 12 helpers by McKinney were the most by a Miner in seven years and came within one of tying the school record.

“If we box out and rebound it’s a winnable game,” UTEP head coach Keitha Adams said. “We gave up 20 offensive boards; rebounding is what got us beat. Lulu McKinney had a good game with 12 assists. She had some nice drives and dropped some passes into our posts.”

The Orange and Blue led by six (10-4) early on and by three (17-14) through 10 minutes of action only to have LA Tech bounce back in the second quarter. It outscored UTEP, 20-9, in the frame to lead by eight (34-26) at the half. The Miners battled down the stretch but could get no closer than five the rest of the way.

“LA Tech deserved it,” Adams said. “They beat us to the ball and played harder. That cost us the game. Rebounding is effort and heart. It’s about 75 percent heart, 25 percent skill. We didn’t want it enough.”

Puc has now hit double figures in scoring in four straight games, the longest such stretch of career. Taylor, meanwhile, has now posted 10+ points in 19 of the 23 contests on the campaign. Tamara Seda pitched in six points and seven boards before fouling out while Katarina Zec recorded six points and a career-high tying four boards.

UTEP had a +3 margin (52-49) in the first, third and fourth quarters combined but it wasn’t enough to make up that second stanza. Jasmine LeBlanc recorded a double-double (17 points, 14 rebounds) to set the tone for LA Tech. She was joined in double figures by Alexus Malone (14 points, eight boards) and Reauna Cleaver (11 points, seven rebounds).

UTEP asserted itself well early on, bolting out to a 10-4 advantage three-and-a half minutes into the contest. Taylor, Zec and Puc all scored during the sequence. LA Tech regrouped and ripped off six straight points to force the second tie of the tilt. Jakeira Ford (jumper and two free throws) and Najala Howell provided a response for UTEP, which pushed back to a five point lead (16-11, 2:12 1Q). The cushion was three (17-14) at the quarter break, but unfortunately the Miners couldn’t sustain that play.

LA Tech started the second quarter on a 10-2 surge to put the Miners in a five-point hole. After Zec found Taylor for a jumper to cut it to three (24-21), the Lady Techsters tallied six straight to grab their biggest advantage of the first half (30-21). UTEP did well to go toe-to-toe with LA Tech the rest of the stanza, but the damage had been done.

UTEP twice reduced the deficit to five in the third quarter but LA Tech converted lay-ups at critical junctures to prevent the Miners from climbing any closer. Unfortunately it was more of the same in the fourth quarter, with every attempt by the Orange and Blue to get back into the game being answered by LA Tech.

The Miners will vie for a split on the trip when they play at Southern Miss at 3 p.m. MST/4 p.m. CST Saturday.Brandon Cohn will have the call for 600 ESPN El Paso, KROD-AM Radio.