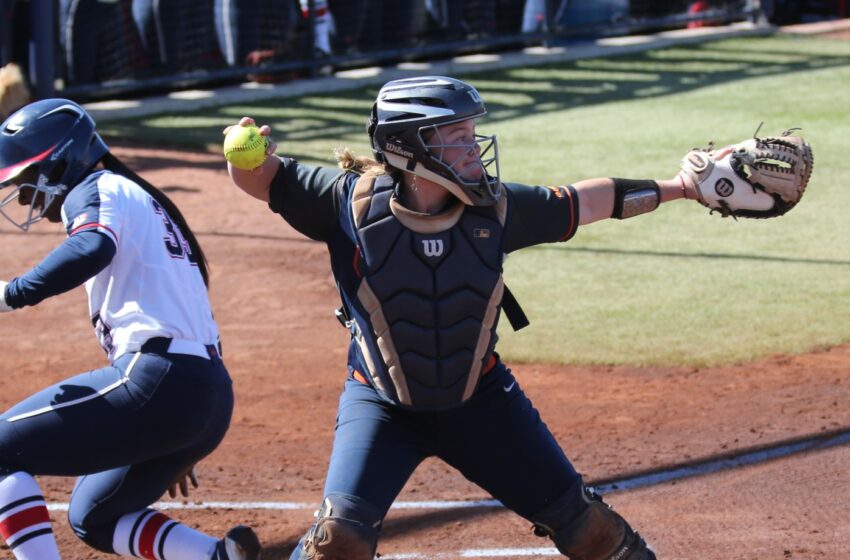 Texas Tech scored four runs during the top seventh to rally past UTEP, 8-5, in game one. The Red Raiders (28-24) followed with a 10-3 victory over the Miners (18-33) in game two on Thursday afternoon at the Helen of Troy Softball Complex.

Senior Courtney Clayton, who made her 207th consecutive start in game two, added to her career total, going 2-for-3 with a double and run scored in game one, while adding another double and run in game two. Clayton now has 244 career hits and 53 career doubles. Clayton needs four doubles to tie Camilla Carrera for no. 1 all-time. Clayton also added her 72nd career multi-hit game and has scored 137 career runs.

Junior Cortney Smith went a combined 4-for-7, including a three-run home run in game one, while tying her career high in hits with a 3-for-4 outing during game two. Smith upped her season average to .300 with her fifth dinger of the campaign.

Senior Kaitlin Ryder went a combined 4-for-7 with two runs and a RBI. Ryder now has 177 career hits and moved to sixth on the program’s all-time hits’ list. Ryder also has 96 career RBI and is looking to become the ninth Miner to hit 100 or RBI during a career. Ryder has played in 195 career games, ranking tied for eighth on the school’s all-time list.

UTEP totaled 18 hits on the day, including 10 knocks in game two.

UTEP 5 – TEXAS TECH 8
In a back-and-forth contest, UTEP took a 5-4 lead when Ariana Valles, who had singled to reach, scored on an error in the fifth inning. The Miners took that 5-4 lead into the seventh, but the Red Raiders rallied to score four runs as Jessica Hartwell hit a leadoff solo shot to tie the contest and Breanna Russell connected on a two-run home run later in the top half.

The Miners took a 4-2 lead in the fourth after Smith lifted a 2-1 pitch and sent over right center. Texas Tech tied the contest in the top fifth.

Kira McKechnie made the start in the circle and struck out five batters in 6.0 frames of work. Julia Wright pitched an inning and recorded a K.

The Miners tallied eight hits as each of the three seniors – Ryder, Sargent and Clayton – went 2-for-3. Ryder scored a pair of runs during the second and fourth innings. Sargent tallied an RBI during the second inning that plated Ryder.

UTEP 3 –  TEXAS TECH 10
After Taylor Satchell hit a solo home run in the top third, the Miners answered and tied the game after Ryder singled in Clayton in the home half. Clayton, who hit in the leadoff spot in game two, had doubled to reach base.

But the Red Raiders put three runs on the board during the fifth on a Hartwell three-run home run to take a 4-1 lead and then added four more runs in the sixth to pull away from UTEP to take an 8-1 advantage.

With the score 10-1, UTEP scored a pair of runs in the seventh on a Mariah Ellis RBI single and a Sargent RBI after reaching on a fielder’s choice.

UTEP turned its Conference USA-best 21st double play of the season in the fourth inning.

UP NEXT
UTEP will host C-USA overall leader LA Tech (33-18, 15-6 C-USA) on May 5-6 during Senior Weekend. Saturday’s doubleheader will start at 2 p.m., while Sunday’s ‘Senior Day’ contest is set for a noon start. The senior ceremony will commence following the final out.