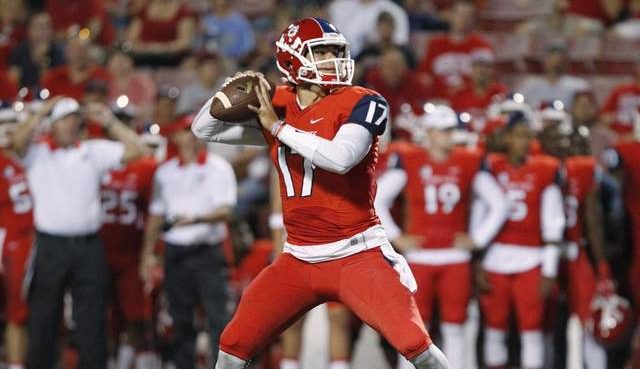 The junior was with the Bulldogs for three years and saw the field for two seasons. As a sophomore in 2015, Greenlee played in seven games and started at quarterback in five. He led the team with 866 passing yards and completed 74-of-156 pass attempts with 13 touchdowns and six interceptions.

During Greenlee’s redshirt freshman year, he played in three games, drawing one start under center versus Wyoming. He connected on an 81-yard touchdown pass against Southern Utah that accounted for the longest touchdown of the season for Fresno State.

Out of high school, Greenlee was invited to participate in the Elite 11 QB Camp and finished camp ranked No. 4 out of the nation’s top 25 quarterbacks. The transfer earned MVP honors at the Las Vegas Elite 11 Regional and was an Under Armour All-America selection.

2015 (Sophomore): Played in seven games, starting five at quarterback  … he led the team with 866 passing yards … completed 74-of-156 pass attempts with 13 touchdowns and six interceptions … his 82-yard touchdown pass to Jamire Jordan against No. 21 Utah was the longest by a Bulldog since 2012 when Derek Carr completed an 89-yard TD to Davante Adams … entered the Utah game in the fourth quarter and threw three touchdown passes, becoming the first Bulldog quarterback going all the way back through at least 1980 to throw three TD passes in a fourth quarter of a game … threw for a season-high 285 yards and six touchdown passes at Hawai`i, tying for the second most TD passes in school and Mountain West single-game history … of his six TDs at UH, five went to different receivers, marking a program first that five different receivers caught a TD in the same game.

2014 (RS Freshman): Played in three games, drawing one start under center versus Wyoming … completed 18-of-41 passes for 213 yards and one touchdown on the season … had an 81-yard touchdown pass against Southern Utah that accounted for the longest touchdown of the season for the Bulldogs … in his start against Wyoming, he was 7-for-16 passing for 55 yards and rushed seven times for 40 yards … was 7-of-18 passing for 49 yards at the Hawai`i Bowl versus Rice.

High School: Invited to participate in the Elite 11 QB Camp in 2012 and finished camp ranked No. 4 out of the nation’s top 25 quarterbacks … earned MVP honors at the Las Vegas Elite 11 Regional … was a 2012 Under Armour All-America selection and played in the All-America game … threw for 1,953 yards with 22 touchdowns and had only two interceptions as a senior … led the Lincoln Trojans to an 8-4 record … finished the season going 11-straight games without throwing an interception … was the Offensive MVP of his conference as a senior and a first-team All-Area selection … threw for 2,415 yards with 22 touchdowns and five interceptions as a junior and was the team MVP … named an All-Area selection and the All-League Back of the Year … in 2010 as a sophomore he threw for 1,459 yards on 88-of-156 passing with 11 touchdowns and five interceptions … earned All-Area and All-League honorable mention accolades … also ran track as a junior, posting a personal-best of 11.02 in the 100-meters … was an honor roll student.

Personal: Born in Stockton, Calif. … son of Cassandra and Jay Greenlee … has one older brother, Jaycob … received degree in mass communications and journalism from Fresno State in May 2016.