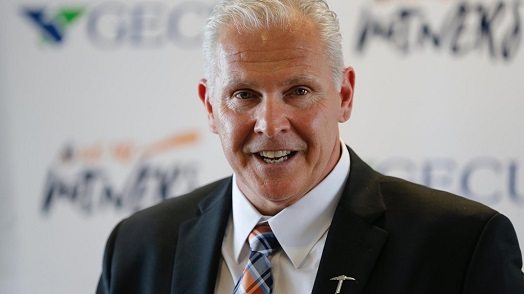 Robinson, one of the most respected special teams coaches in the country, brings over 28 years of coaching experience. Robinson, a native of Abilene, Texas, will coach at his third football program in the State of Texas. Robinson recently completed the 2016 campaign at Texas Tech as the special teams coordinator with head coach Kliff Kingsbury and served on Dimel’s staff at Houston in 2002.

While at Texas Tech, the Red Raider special teams unit ranked among the top 50 in the country for both punt returns (39th) and blocked kicks (44th). It marked the second time in the last three years where Robinson’s punt return team has ranked in the top 40 nationally. Prior to coaching in Lubbock, Robinson served on Steve Spurrier’s staff at South Carolina for four seasons.

“Robinson is one of the most well respected special teams coordinators in college football,” Dimel said. “He made a significant impact on our special teams at Houston and Arizona. He has been at multiple power five programs and made a dramatic difference at each program.”

Simmonds will enter his 25th year of coaching after being at Northern Iowa for the 2017 season as the program’s offensive line coach/co-offensive coordinator. Northern Iowa led the nation (FCS) in red zone offense, converting on 92 percent of its opportunities (51 att., 31 TD, 16 FG). UNI averaged 29.4 points per game in 2017, while averaging 354.7 yards of total offense in 13 games (8-5 overall record). Simmonds spent the 2016 season at Eastern Illinois, directing the offensive line. His line ranked 36th nationally in fewest sacks allowed (2016). Simmonds also spent time at North Texas (2011-15) with current UTEP offensive coordinator Mike Canales, while the two also coached at South Florida together.

“Simmonds is a very good teacher and has great passion and love for developing lineman,” Dimel said. “I know the offensive linemen at UTEP will developed and will play with great passion under Coach Simmonds tutelage.”

Rahl, who started coaching as a student assistant at his alma mater Missouri Southern State University in 2002, comes from McKendree University, where he spent four seasons as the offensive coordinator and offensive line coach. Rahl, in the summer of 2017, also became the associate head coach for McKendree. He spent five seasons at Wyoming (2009-13) as the director of recruiting, while he was also the Cowboys’ defensive line coach from 2011-12.

Rahl played tight end (1999-2001) at Missouri Southern State before heading into the coaching direction. During the 2007 and 2008 seasons, Rahl served as a graduate assistant the University of Missouri. Rahl helped coach the Tigers’ offensive line. In Rahl’s two seasons at Missouri, the team ranked in the top 10 nationally in total offense, scoring offense and passing offense.

“Rahl is such a versatile asset to our program,” Dimel said. “He brings a good football background, but also has done an outstanding job in coordinating our recruiting efforts.”

Schadt will enter his first season as the director of strength and conditioning after serving as an assistant at Kansas State (2012-17) will Dimel. Prior, Schadt spent three years (2009-11) with the Army West Point football program as an assistant. He graduated from University of Delaware with a degree in applied nutrition and strength and conditioning in 2007. Schadt also earned his Master’s Degree in health, human performance, and recreation from Pittsburgh State in 2017.

“When working with Schadt at Kansas State, the players at K-State felt that he had outstanding communication skills as a teacher,” Dimel said. “He is a great motivator and instructor, which is essential to the strength position.”

Oglesby just completed three seasons with Oregon State, the first in 2015 at offensive quality control and the last two (2016 & 2017) as a graduate assistant/offensive line. In 2016, left tackle Sean Harlow was named to the Pac-12 All-Conference second team. Oglesby arrived at Oregon State after serving as a graduate assistant coach at Wisconsin under then head coach Gary Andersen from February 2013-May 2015.

As a coach for the Badgers, he worked with the offensive tackles, tight ends, specialists and with the scout teams. Oglesby was a four-year letterman offensive tackle for Wisconsin from 2007-11, starting three year and redshirting as a true freshman. He was a consensus All-Big Ten Conference selection as a senior and helped the Badgers to two division titles.

“Oglesby has a great knowledge base of offensive line play,” Dimel said. “And will have a great teaching rapport in mentoring our offensive line.”

The 2018 schedule was officially released on Jan. 24 and features six home contests. The Miners will open against Northern Arizona on Sept. 1 in the Sun Bowl and will then travel to UNLV (Sept. 8) and Tennessee (Sept. 15) before returning to El Paso to face I-10 rival NM State. UTEP will open Conference USA action on Sept. 29 at UTSA, and will complete the regular season against Southern Miss (Nov. 24) in the Sun City during Thanksgiving Weekend.

Season tickets may be purchased or renewed starting Feb. 15 – call 747.6150 or click utepahtletics.com for more information.