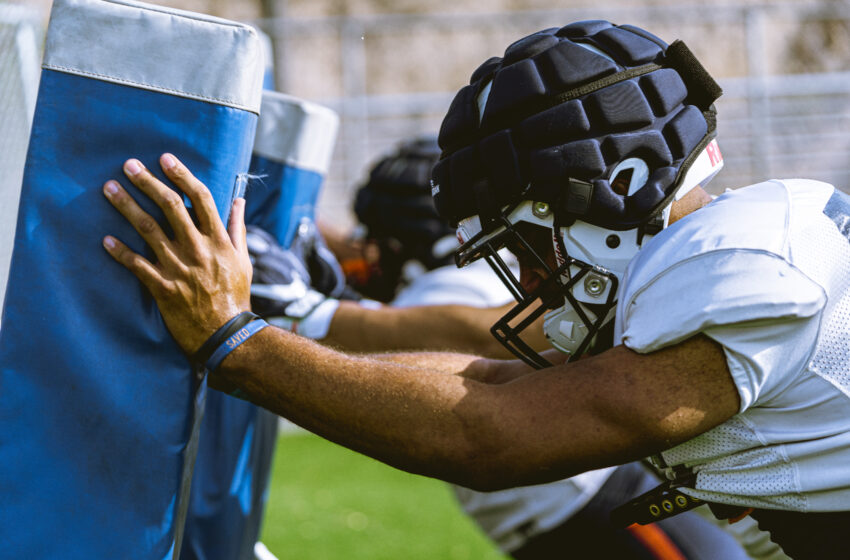 The UTEP Football team made its long-awaited return to the practice field on Sunday morning as the Miners spent a little over two hours on Glory Field in preparation for the 2020 season.

A mixture of new and old faces graced the field on Sunday morning with the 2020 squad strapping on the pads for the first time. With the exception of offseason workouts and walk-throughs, it’s been nearly five months since UTEP stepped onto the practice fields with pads on.

Since the middle of March, the Miners have spent the majority of their time meeting virtually as a team.

“There are a lot of different derivatives that go into this camp as we prepare our football team,” head coach Dana Dimel said. “I feel like we have provided a very safe environment for them where we test them every week now. We feel like we are in the safest environment there is for these young guys. We really feel comfortable with the environment our guys are in, so we are just going to keep moving forward and keep doing what we’re doing.

“You come back now after the guys have been sitting out a week and you can’t get everybody hurt on day one because you’ve got less than three weeks until our first game and we have to make up for the days of training camp that were taken away from us. We have to be really smart about what we are doing. We have to be super efficient and spend great time between practices. We have a lot of new faces and this is a new team. There’s a new face everywhere you turn. With newness comes inexperience and time is critical for us.”

And while the 2020 schedule has yet to be officially completed, Dimel and his staff are tasked with getting the Miners prepared to play a game on the first Saturday in September.

“For the first day, I’ve got a lot on my mind right now, so I don’t think there’s going to be a day that I’m happy right now with where we are because of all those intangibles,” Dimel said. “I’m just looking at getting our team ready in a three-week time frame. I’ve done it before as a head coach back in the day when we would come to camp. I cut my teeth in the business on getting your team ready in three weeks, but these players haven’t done it, so I’m trying to go back to all the coaching tools we’ve used on how to do it with the team. I think we got out there and worked really hard. By the middle of the week, I’ll probably feel a little bit more comfortable. I think the guys were excited because they needed to get back out on the field. They’ve been sitting around for a week just waiting to go.”

Defensively, the Miners were clicking on all cylinders Sunday morning with a handful of forced turnovers, including one by safety Justin Prince, who led UTEP in tackles through the first four games of last season before a broken foot sidelined him for the remainder of the year.

“It was good to have our first day back,” Prince said. “We’ve been really anxious to get back with everything else going on. We’re kind of free at last, but we still have to be safe and precautious. The biggest thing right now is learning and getting ready to play. We have been waiting to start the first day of camp, but we are really excited to be out there and get ready to start the season. We have to prepare every day to play September 5, so every practice is like a game with being locked in and paying attention to detail, and of course doing the right things outside of practice.”

As an offensive unit, UTEP was short-staffed at various positions due to pending test results, including quarterback, running back and the offensive line, but the Miners persevered and were still able to show flashes of progress during team drills and the two-minute offense.

Gavin Hardison, a redshirt sophomore who played in two games for the Miners last season, said the biggest point of emphasis for the team right now is staying focused despite all of the outside noise surrounding college football.

“We just go through our reps and make sure we are staying mentally focused throughout the whole practice and making sure the guys are on point,” Hardison noted following the first full practice. “It was exciting being out there. We’ve been waiting for this for a while, so it was fun and good to be back out there with everybody and get back into the swing of things. It felt like normal being back out there with the guys finally getting out there and get reps against a live defense. I feel a lot more confident out there with what we’re doing. We are just staying mentally focused throughout everything and locked in so we can get this thing going. We’ve got a lot of weapons on offense and I think we will be firing on all cylinders, so I’m excited about it. We’re just getting ready to play. I am ready to play whenever.”

The Miners return to the practice fields at 8:35 a.m. on Monday at Glory Field. UTEP is scheduled to practice Monday-Wednesday in the morning before an off day for the team on Thursday.