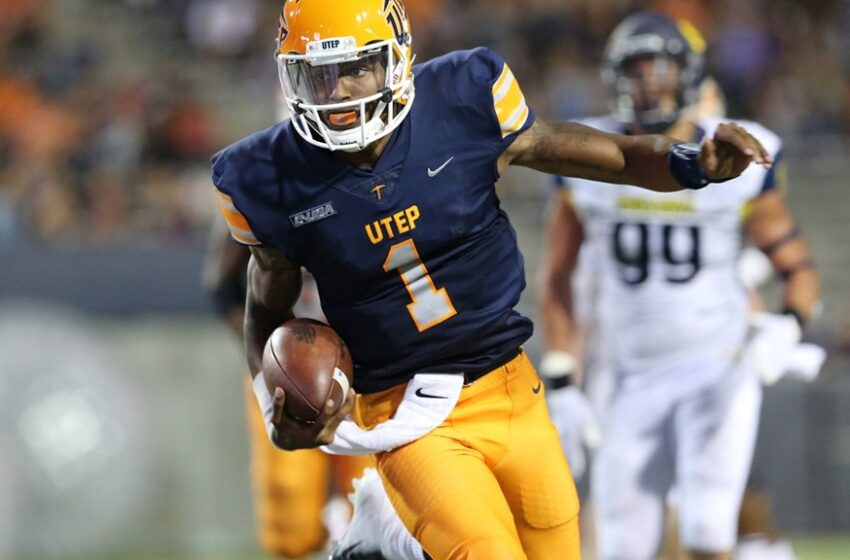 UTEP burst out to a 27-0 lead in a dominating first-half performance, then held off resurgent Rice in the second half for a 34-26 win, its first victory since 2016.

It was UTEP’s first triumph at Rice Stadium since 2005, its initial year in Conference USA.

“Obviously the first half was the style of football that I love to see our team play,” Dimel said. “That was good football in all three aspects of what we did. In the second half, give credit to Rice. They came back and did some really positive things and hung in there. That team’s got a lot of fight. But our guys found a way to win. There wasn’t any panic in what we were doing and we just stayed within the game plan. The defense made a couple of great stands there in the fourth quarter. Overall I was very, very happy with the way our football team played and very excited to get the victory.”

UTEP piled up 310 yards of offense in the first half. Kai Locksley threw for 193 yards in the first 30 minutes, and joined Quardraiz Wadley in rushing for two touchdowns.

It didn’t take long for the Miners to get on the board. Wadley’s 12-yard scoring run with 12:32 left in the first quarter made it 7-0. It was UTEP’s quickest TD versus a C-USA opponent since 2011, also at Rice.

Wadley and Locksley alternated TD runs in the first half, with Wadley scoring twice on 12-yard runs and Locksley picking up a pair of one-yard scores.

Rice only managed four first downs in the first half, with one coming on a 35-yard pass from Wiley Green to Austin Walter late in the half that set up a 43-yard field goal. The Owls had 96 yards in the first half.

The teams traded touchdowns in the third quarter, with Treyvon Hughes picking up a 19-yard rushing score.

But Rice came alive in the final period, as Green connected with Austin Trammell for a pair of long scores and the Owls converted back-to-back two-point conversions, suddenly making it a one-possession game (34-26) with a little over eight minutes to go.

The Owls would get a few more cracks at it, but a UTEP defense that has been solid all season long stepped up time and time again. First, the Miners forced a three and out. Then Justin Rogers picked off Green’s desperation pass on 4th and 20 at midfield. The game ended on a 25-yard completion from Green to Jordan Myers at the Rice 36-yard line when the clock ran out.

UTEP was balanced as can be offensively with 210 yards passing and 200 rushing. Locksley completed 13-of-21 passes for 193 yards. Wadley and Hughes rushed for 91 and 76 yards, respectively.

UTEP meets Middle Tennessee on Fan Appreciation Day Saturday, Nov. 10. Early kickoff is set for 1 p.m. in the Sun Bowl. Special fan rewards will be given away throughout the game, and fans are invited to come on the field postgame.

The first 2,500 fans will receive free hats. Purchase of a football ticket gains free admittance to the UTEP women’s basketball season opener versus Alcorn State that evening in the Haskins Center.