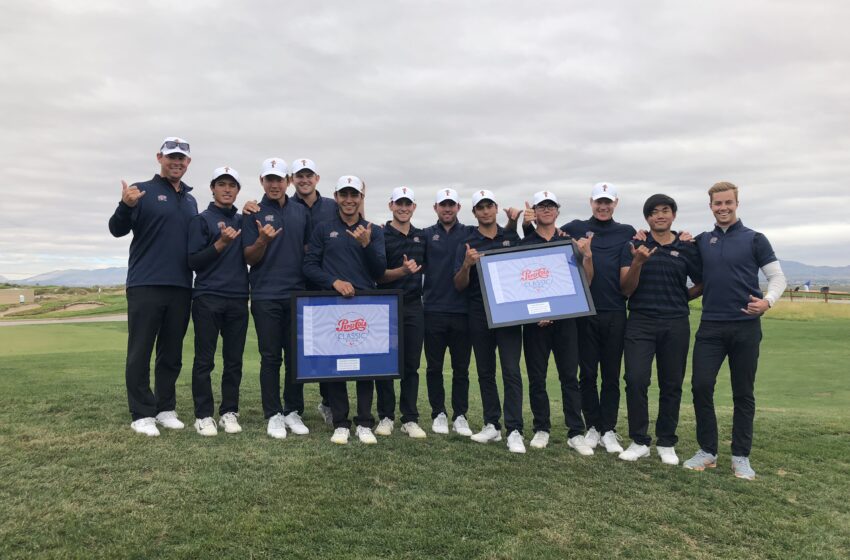 LAS CRUCES  – UTEP men’s golfer Aaron Terrazas (69-65-67—201) fired a Red Hawk Golf Club record in the second round on Saturday to take a commanding lead heading into Sunday’s final round.

The senior never let off the gas pedal and claimed his second consecutive tournament, but this time he was the lone champion.

“At the beginning of the semester, I had a bit of a rough start with my putting and short game,” Terrazas said. “My game overall, wasn’t at its best over the last month of a half. I started to work on being a better golfer overall. Today, I had two purposes. One of them was to have a nice rhythm in my tempo and my swing, and the other was the be as committed as possible on every shot.”

And regarding the new course record of 65 on Saturday.

“I was just giving myself decent opportunities for birdies, ended up making a few at the end and I capitalized on them and, you know, add them all up and I got a 65,” Terrazas added. “It’s a nice feeling having my name in here at Red Hawk with that number next to it.”

“I’m very proud how we progressed in the fall. The first three events were rough and we didn’t have a lot of confidence,” UTEP men’s golf head coach Scott Lieberwirth said. “We started to kind of find our way and figure a few things out. Really, Aaron and Oskar (Ambrosius), the way they’ve played, especially during the month of October, have been rocks for our team. What Aaron Terrazas did this week, that was one of the best performances I’ve ever had the pleasure to coach. He was on fire. Just stay away and let the man go to work. He was absolutely on point and played like a professional this weekend. It was fun to watch him and it was incredible golf. This last week, you know, two wins in one week, not many people can get to say they did that.”

UTEP fired a 282 (6-under par) during the final round and GCU tallied a 294. The Miners also recorded a field-most 52 birdies, while Terrazas and freshman Marcus Khaw each recorded an eagle on hole no. 5 (par 5/601 yards).

Oskar Ambrosius 74-67-70—211), aforementioned by Lieberwirth, also came up with a big outing as the sophomore registered his highest finish, tying for second with NM State’s Mike McGilton. Terrazas led all players with 17 birdies, while Ambrosius scratched out 14.

“The quality of golf he’s (Ambrosius) played most of the fall and especially this month has been a huge factor on why we’ve been able pull ourselves out of that slump,” Lieberwirth said. “If we can continue to develop some of the other guys and get a little more support for our backend, I feel like we can be a pretty good team. We need to continue in the offseason so were ready to go for the spring.”

The Miners will continue the 2018-19 season when they travel to Tucson to compete at the Arizona Intercollegiate to tee off the spring season (Jan. 28-29) at Sewailo Golf Club.