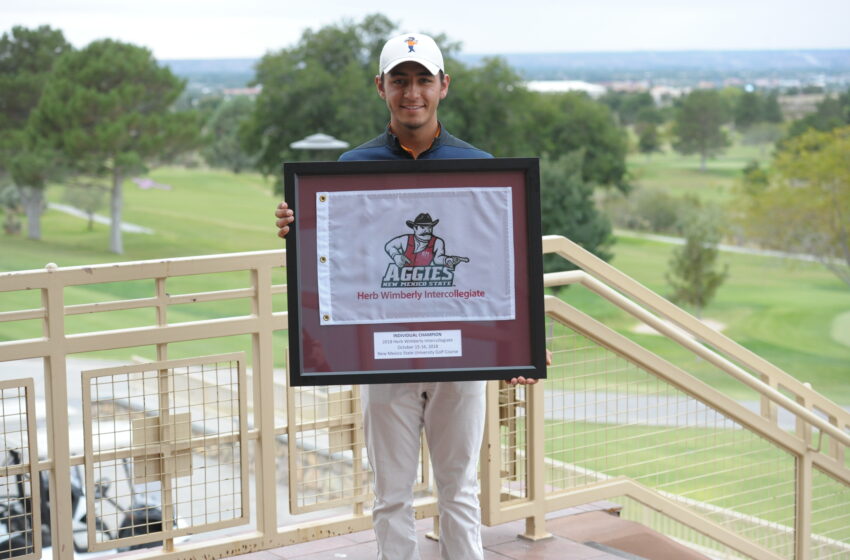 LAS CRUCES, N.M. – The UTEP men’s golf team registered its best finish of the fall, placing second, and senior Aaron Terrazas won his first collegiate tournament as he was co-champion at the Herb Wimberly Intercollegiate at NM State Golf Course on a chilly Tuesday afternoon.

The Miners (+26) birdied 40 times, the most by any team, while NM State (+21) won the team championship on its home course. Oral Roberts finished one stroke behind UTEP for third.

“We’re continuing to see improvement and I was pleased by the way our guys competed and played this week,” UTEP men’s golf head coach Scott Lieberwirth said. “It was the second tournament in a row we had some difficult weather conditions and course conditions.”

The pair pretty much went stroke for stroke the last five holes. Terrazas pared hole no. 14 (par 4), while McGilton bogeyed the same hole. Each of them birdied hole no. 15 (par 5) and bogeyed on 17 (par 3).

“We did see some good play by a number of different guys and I’m really proud of Aaron getting his first collegiate victory,” Lieberwirth said. “It was really big for him and I can see this boosting his confidence and using this as a springboard going forward.”

“Some of the other guys did great as well,” Lieberwirth said. “Oskar (Ambrosius) had a great day yesterday, Settavut (Paradee) came back and played a nice round today which was big for him and his confidence. Our little freshman, Marcus (Khaw), had a great tournament as well, but let it go at the end. But he was right there too.”

The Miners will return to action Oct. 20-21 when they host the Pepsi-Cola Classic at Red Hawk Golf Course in Las Cruces.