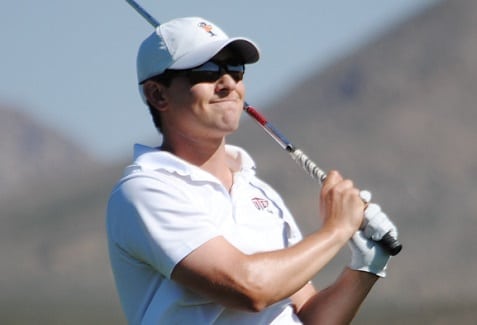 ALBUQUERQUE – UTEP golfer Greg Yellin jumped out to a three-shot lead following the first round of the U.S. Amateur qualifying earlier this week at the University of New Mexico Championship golf course in Albuquerque.

The El Paso native fired a 66 in round one and concluded the two-day event eight-under par (66-70—136), placing first in the qualifying round to advance to the 118th U.S. Amateur Championship at Pebble Beach and Spyglass Hill Golf Course Aug. 13-19.

“I played really well the first day. I knew it would take pretty good scoring to get through and qualify,” Yellin said. “The first day I started out really well and was three-under through four holes. I told myself, ‘to keep going, there’s still a lot of golf left’. But I shot a 66 in the first round and had a two-shot lead. So, nothing was secured after the first day, but I was in a good spot to be in – a two-shot lead. The second day I was expecting 70 or below should be good enough to qualify. So, I didn’t try to do anything to crazy, just played solid and played smart.”

After finishing four shots ahead of the runner-up and second qualifier, Yellin will compete with 311 other elite amateurs from the across the globe at one of the most respected and revered golf courses in the world at Pebble Beach (par 72, 6,960 yards).

“I still can’t wrap my head around it, me playing at Pebble Beach in about a month,” Yellin said. “It’s going to be incredible. I redshirted [at UTEP] last year and wasn’t playing very well. I came into the summer with not many expectations and just wanted to start playing more and start playing well again. To even think of qualifying for the U.S. Am and to be playing at Pebble Beach pretty soon – it can’t believe it.”

This year’s U.S. Amateur will be the fifth on the Monterey Peninsula dating to 1929. The first two rounds, with a field of 312, will be stroke play, followed by four rounds of match play. The 36-hole final is scheduled for Sunday, Aug. 19 at Pebble Beach.

Yellin, who redshirted during the 2017-18 season, will compete for the Miners this upcoming athletic season. The graduate of Coronado High School was named the Player of the Year in 2017 and Co-Player of the Year for El Paso high school golf in 2015.