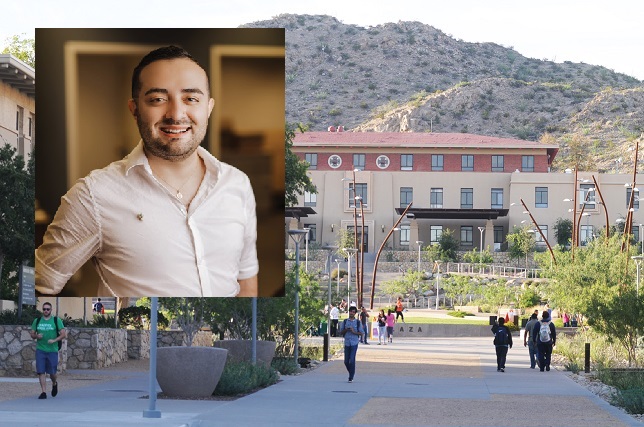 Javier Segovia, a graduate student at The University of Texas at El Paso, will study the friendship and artistic relationship between great 20th Century artists with El Paso connections Tom Lea and Urbici Soler as part of his recently announced Tom Lea Fellowship. | Photo Courtesy of Javier Segovia

Segovia, a collections and communication manager with the El Paso-based Tom Lea Institute, said he was excited to have earned this fellowship that includes a $3,500 award.

The first-generation college student said he will use this opportunity to study the friendship and artistic relationship between Lea, an El Paso native who became an internationally known writer and artist, and Urbici Soler, world-famous sculptor responsible for the Mount Cristo Rey statue in Sunland Park, New Mexico.

His paper on Lea and Soler will be part of an exhibit open throughout October 2021 in UTEP’s Centennial Museum. He will make a special presentation Oct. 7.

Segovia said he expects to spend a lot of time in the archive of the Catholic Diocese of El Paso and the University Library’s C.L. Sonnichsen Special Collections Department, which has a large collection of Lea’s papers and two collections about Soler.

“I believe this research and exhibit are extremely beneficial, especially to El Pasoans, because the Cristo Rey monument is such a unique El Paso staple, and many do not know about its history or about Tom Lea,” Segovia said.

Melissa Warak, Ph.D., assistant professor of art history, is the Tom Lea Fellowship Program faculty liaison and chair of the four-person committee that selects the fellow, which comes from a pool of graduate and undergraduate students from majors throughout the College of Liberal Arts.

Warak said the committee, made up of faculty members from the college’s different departments, felt strongly that Segovia’s Lea-Soler project would advance the understanding of Lea’s work in the region.

“Understanding artists’ networks of collaborations with other artists and creative persons is an important part of contextualizing their work as a product of its time and, furthermore, lends more nuance to the narratives about the careers of individual artists,” Warak said.

Segovia, a native of Ruidoso, New Mexico, expects to earn his paralegal certification from UTEP’s Extended University in May 2021 and his master’s degree by the end of the summer. He received his bachelor’s degree in history with a minor in museum studies from UTEP in May 2019.

Claudia Rivers, director of Special Collections, said she got to know Segovia during his undergraduate years when he would conduct research in the library.

“Javier is an enthusiastic researcher,” said Rivers, who added that he will have plenty of primary source materials to review in her department. “I look forward to reading what he may discover, since not much has been written about the relationship between those two artists.”

Segovia, who also is a first-generation U.S. citizen, said he has not decided what he will do after he earns his master’s degree. He plans to either apply for UTEP’s doctoral program in borderlands history to become a museum director and eventually a UTEP professor, or pursue a law degree so he can represent LGBTQ+ individuals who seek asylum.

El Pasoans Dee and Adair Margo established the Tom Lea Research Fellows Program in 2013. The program’s goal is to encourage scholars to prepare publication-quality investigations into the artist, his work, the ideas behind that work and theories that could broaden how his work is understood.