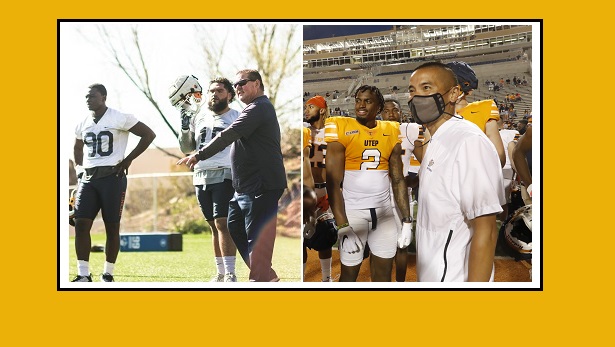 UTEP head coach Dana Dimel has appointed Matt Wallerstedt and Scotty Ohara to new titles on the Miners’ football coaching staff, it was announced by the program on Wednesday.

Wallerstedt, who has been with the program since 2018, has been named associate head coach and will continue to lead UTEP’s defensive line.

The Miners ranked third in C-USA and 39th nationally in rushing defense last year, while the defense also ranked fourth in C-USA in first downs defense during the shortened 2020 season. UTEP was third in the league and 26th in the country in scoring defense last season.

“The experience Matt has in this profession and then my past experiences I’ve had with him at other universities allows me to really use him as a strong resource and makes him a really good candidate to be our associate head coach,” Dimel said.

In addition to leading the wide receiver corps, Ohara will also take over as UTEP’s passing game coordinator as he enters his fourth season in the Sun City.

“Scotty has a tremendous knowledge of the game of football and really understands our offense as well as anybody in the program,” Dimel stated. “He will be a great resource as our passing game coordinator to our offensive football team.”

Ohara, who has led the wide receivers since 2018, had a pair of receivers rank in the top 10 in C-USA in receiving yards last season in Jacob Cowing (3rd) and Justin Garrett (8th). Cowing earned Second Team All-Conference USA honors, while Garrett picked up Honorable Mention accolades in 2020. As a team, the Miners ranked 8th in the league in total offense.

UTEP returns a total of 10 starters on offense and eight returning starters on the defensive side of the ball heading into the 2021 campaign.

New season tickets are now officially on sale for the 2021 UTEP Football season. Ticket prices start as low as $65 and flexible payment plans are available.